I'm sure banana bread is better if you add the eggs...oops

The house smelled so good the other day from baking a ham and baking banana nut bread...so I took out the bread and it looked pretty dense, didn't rise at all..hmmm..what could be wrong I've baked with applesauce in place of sugar before.  Oh well, maybe it'll taste ok...

Had a really good ham, mashed potatoes, gravy and veggies for dinner.   Actually, we've had it a couple of days in a row now.

Friday, we went to Gardnerville and did some shopping for the trip.  We started in Carson City looking for some foam at JoAnns fabrics...way to expensive.  In the cabover we like to sit in bed with our backs to the cabinets and have our morning coffee and computer time.  But it's pretty uncomfortable leaning against the cabinets.  So Ken cut 2 pieces of plywood and we thought we'd get foam and I'd make a cover for them. At Walmart I bought 2 inexpensive pillows and we duct taped them to the boards.  I actually had two pillow  shams that fit perfect so wham, bam, done!  Very comfortable too.

Yesterday Ken opened the water pump that we ordered from Amazon. Well, it's broke.  Looks like on the outflow the nipple was broken off from someone twisting it way too hard.  I'm thinking what happened is that someone returned this one, they stuck it back on the shelf and we got it.  I emailed Amazon and we'll see what happens.  They're usually really good about this stuff, so I'm sure they'll send another.  Now they'll have to send it to Don's place in TN.

So now what, no water?!  Well, Ken was able to rig it so the old one will work, but not the way it's supposed to..Looks like we'll have to turn on the pump let the water run, turn off the pump, but don't close the faucets as pressure will build (or that's what I got when he was telling me)..So we'll make it work.

It was so windy yesterday you could hardly stand to walk from the house to the camper. So I got things ready inside and am hoping for a better day today!  Last night the wind just blew and blew and this morning (Sunday) we awoke to a little snow.  Very pretty but it's gone from here now. The mountains have a lot on them so it's nice to look out the window.

Ohh the banana bread?  Friday morning, I got up to make breakfast.  I knew I had used the last 3 eggs to make hardboiled for salad.  So at the store I bought 18 more eggs..2 to be used  in the bread.  When I opened the egg carton there's still 18 eggs, well how could that be??  Oops...I forgot to put the eggs in the batter..so Ken suffered through 2 days of this very dense, not good banana bread and this morning he finally said he couldn't do it anymore..hahahah...I told him from the start to just throw it out.


Russell and his Sacramento Beer Enthusiasts partnered with a new brewery..well it was formerly called Alley Katz, now they have reopened with the name "The Bunker Bar and Grill".  They had an event on Friday night that was a benefit of a group called GoGive2Live.org It is a 501c3 organization. These people use the money donated to help veterans with PTSD and suicide prevention programs.   That evening they raised over $4000.00 for this group.  Russell got a hat from GoGive2Live.. and a shirt (from a different brewery)...how nice to know that beer drinking can go for such a great cause. 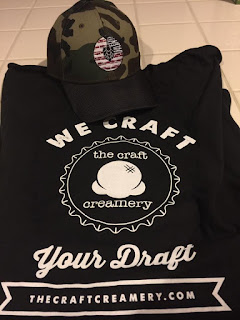 Well, have a wonderful day..time to get started..hopefully packing the camper.  Looks like we're going to start out spending the night in Rachel, NV (looking for Aliens)...then on to Caliente and a FREE State Park!


Forgot to mention, Eric sent a video of him driving the 61 around his property!  Awesome...here's hoping he can get it on the road soon..of course it needs some beauty work done...but it's running! Again I could not get it to post...darn!!
Posted by Ken and Shirley at 7:58 AM