Ken was able to get the whole roof covered with roofing tin on Friday morning. 😁 We  need a couple more pieces as he wanted the roofing over the back of the structure covered. If he had put the front posts in further we wouldn't need to do it, but he wanted it as big as possible. We'll get that done after coming home from Bryan's house. 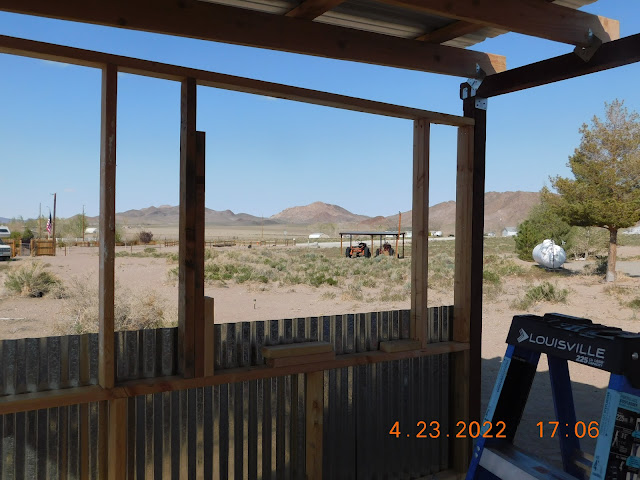 He actually was able to start framing in the red window, but we need more 2x4's so we'll get that later this week too. 😀

He brought the Mansion over and we got it loaded up and ready to go.

Sunday morning we left home about 0900 and arrived in Lincoln, CA just about 1300. 4 hours so not a bad drive.

We checked out Bryan and Cheryl's lovely new to them home on wheels. It's a Montana 5th wheel and it's gorgeous. Perfect for the two of them for now along with the two dogs 😀

We met up with Renette and spent the afternoon visiting under the back porch area where it was much cooler than out in the sun.

Adam and Erin got here about 1500 hrs after spending some time in the Sacramento area looking for a camera lens for Adam. 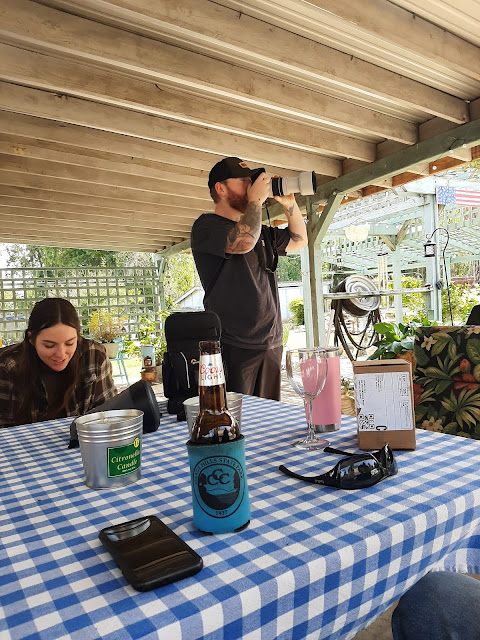 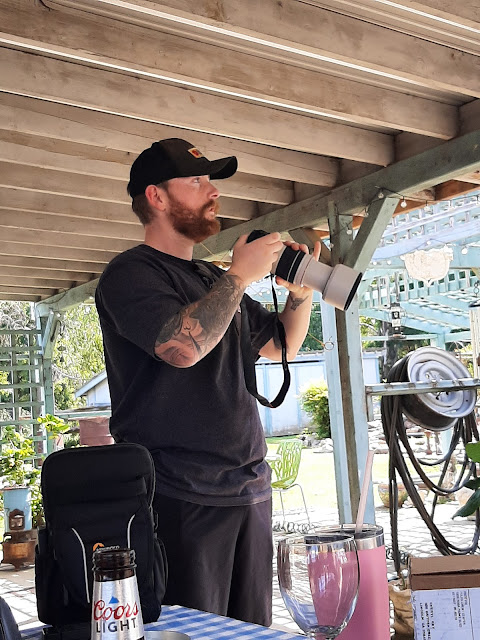 Cheryl made some yummy stuffed bell peppers and salad for dinner. After deciding what to do on Monday we called it a night around 2230.

Monday morning we were going to visit with Ken's mom in Carmichael, but she needed to go to the emergency room as she'd had some problems over night. Diane (Ken's sister) was on her way over to take her there. We found out later that they admitted her to run some tests.

We headed out and took Bryan to lunch at Cafe Delicias in Roseville. Cheryl had decided to stay home so she could work on Bryan's birthday dinner for Tuesday.

Later we just hung out under that porch again, as it's really nice out there. I had made a pork roast, mashed potatoes, gravy and green bean casserole. Adam stopped by after returning the lens he bought the day before and was able to have dinner with us.

Tuesday was Bryan's 49th birthday so we just hung around. I had made a breakfast casserole so we enjoyed that.  Cheryl made spaghetti and meatballs for dinner and a yummy chocolate cake. We sat in their 5th wheel for a while in the evening. What a nice place! 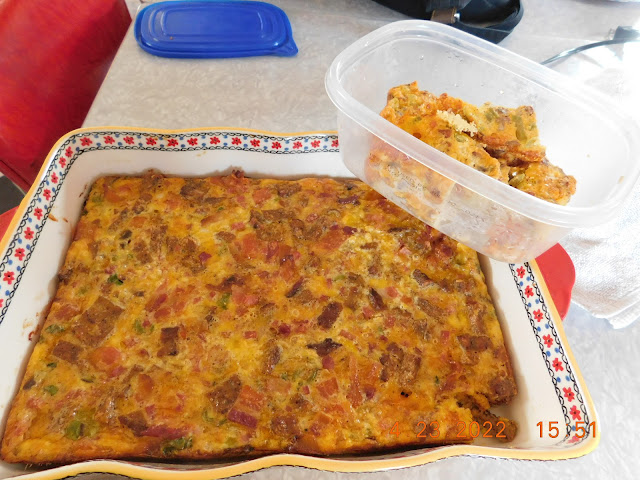 Wednesday morning we got ourselves ready to head home. We wanted to take Bryan and Cheryl to breakfast so we loaded into Cheryl's car and headed for Lincoln. It used to be just a small town when she was growing up there, but boy has it grown and still growing outward. Signs everywhere of new sub divisions and starting from the low $500,000's!

We had an awesome breakfast and yes we'd definitely go back there again!

We got home and after a bit, hugs goodbye and we headed out. We did hear as soon as we were on the road that Grandma was headed home too. We wanted to get the Mansion home, and here in the next little bit we'll run over to do a one day turnaround and visit with her.


We got home around 1600. We didn't unload much and actually had Happy Hour out in the Mansion and dinner too. Unloading, that's what tomorrows are for right?!

Today was the day for unloading and getting things done. Ken got the Mansion back to it's parking spot and hooked up the 12 foot utility trailer as we're heading for Lowe's and Walmart tomorrow. Gotta get him back to work. LOL.

Have a great evening, it's almost Happy Hour! 🍷🍺 With the winds I'll be surprised if we find a spot outside!

Today our oldest grandson, Adam turns 23! Another of "where does the time go?" 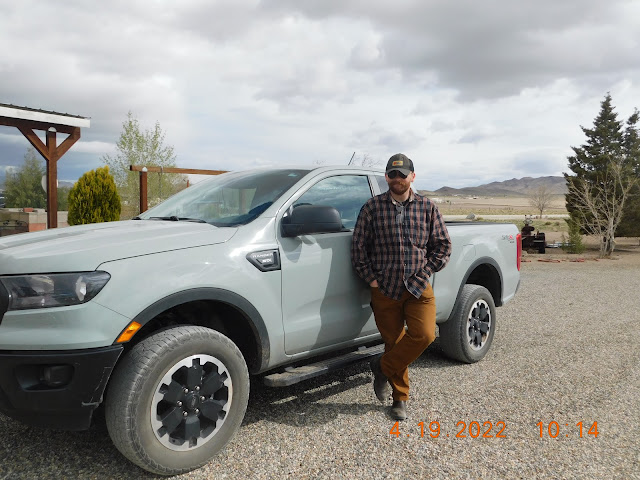 He left here the other day for a solo trip down highway 395 to take some pictures and do a few hikes.  He texted this morning asking if he could come here as the weather was bad and it was cold. He was in the Lee Vining area. A few hours later he was here!

I was making him some lemon bars. Guess I don't have enough practice at that as I ended up putting the ingredients for the center part in with the crust. Then I realized my mistake when I pulled out the other bag LOL. Oh well just put everything together and cooked it anyway. Still seemed to taste good. We shall see once he cuts into it. 😂 Update: they are delicious! Looking forward to one with coffee!

The winds are up once again! Darn, today we were going to put the tin roof on the kitchen. Ken's been out working all day on the facia board and putting the rest of the screws and nails in the joist hangers and the other end. Looks good!

Yesterday he got the rest of the corrugated metal up in the back and then all the joists up along with the boards that will go across for the metal roofing to sit on and be nailed to. 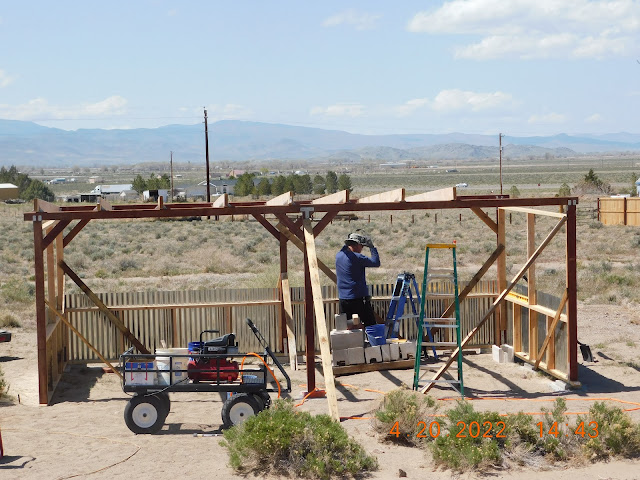 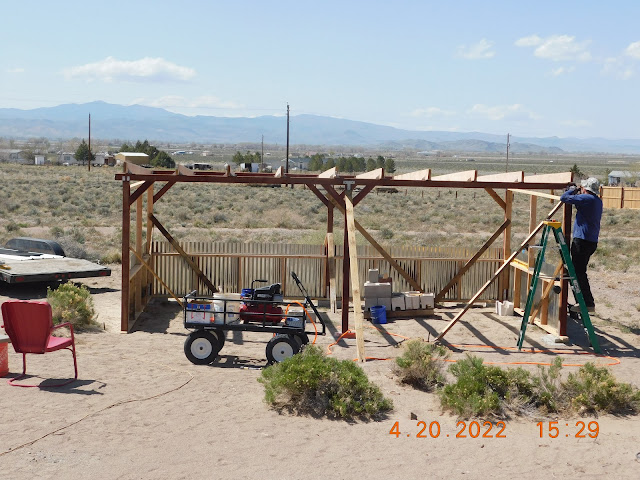 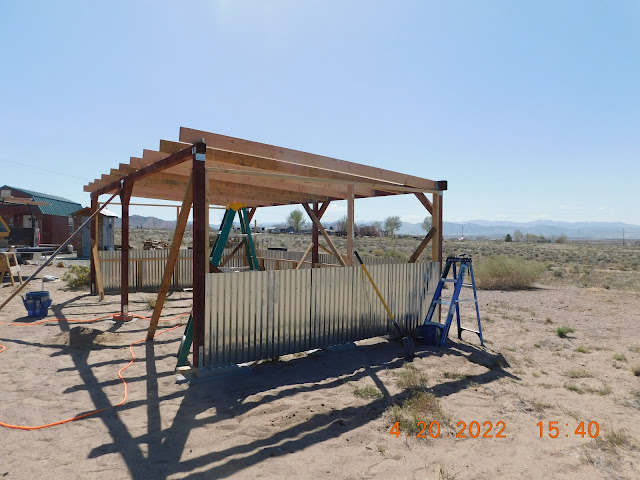 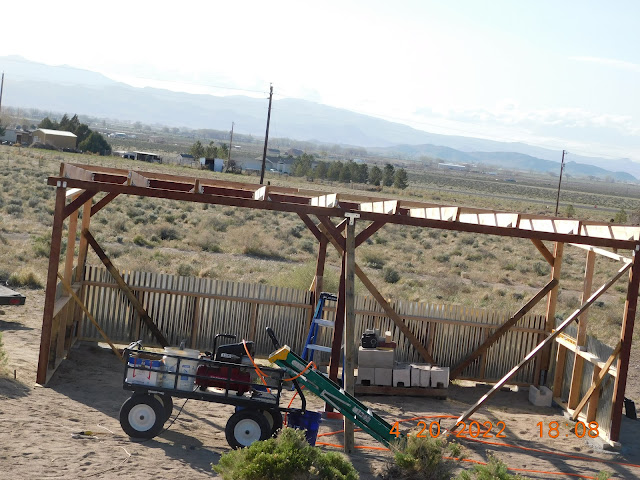 W
He'll head home to Chico tomorrow and on Sunday we'll head to his mom and dad's to spend a couple of days. Adam and Erin will visit on Sunday. 😋
Hopefully we can get a couple of pieces of tin up tomorrow before the winds hit..if not oh well, next week.  Have a great evening !
Posted by Ken and Shirley at 9:42 PM 8 comments:

Happy Birthday Eric, Running around, working on the kitchen, A short visit from Adam

Yesterday we decided to head for Reno as the night before on FB Marketplace found a window I liked and she still had it available. We found her house in a beautiful neighborhood near Verdi, NV.  A young family that looked like they were still in the process of moving in to their home. As soon as we saw the window we both loved it and told her so. She said she was happy it was going to a good home as the window had been her mom's but she just didn't have room for it anywhere. We told her our plans for it and you could tell she was happy.  She only wanted $15.00 for it, but we gave her 20. Definitely worth more than that!  💖

After leaving there we headed to Habitat for Humanity's store in Sparks. Well, we lucked out there too. We didn't want windows that open and were able to find 2 of the same. One had a price of $20.00 and one wasn't marked. We went to the check out and she called someone up. He asked us if we'd pay $15.00 for the 2nd window...uh YEAH!  So for $55.00 we've got three windows for the kitchen just so we can enjoy the views! Happy Campers here! 😊

Total Wine for a pick up, then to Carson City for Walmart groceries and Lowe's for some more wood and screws.  By then we're pushing close to 1500 hrs.  Time for some food as we were starving! LOL.

Instead of Betsy's we headed for Red's Old 395 grill! YUM! We've been there only once before about 2 years ago. The food and service is excellent.

Adam had called earlier asking if he could come over and of course we said yes! He knew we wouldn't be home probably, but he knows where the key is.  We didn't get home until almost 1800!

We had a nice evening visiting with him as always.

This morning after bacon and eggs he left around 0930. He's heading for Bishop and Lone Pine on a picture taking journey for a few days. Great inspiration in those beautiful places! 💙🏔

After he left we headed for town to see how Karen's store is coming together and it's awesome! She's really got an eye for putting things together.  Ken took our weed eater so he could chop some weeds outside her store area.

Once we got back home Ken's back at the Kitchen. The weather is cold and windy but he's tough! I don't think my supervisor chair will get used today! LOL. Tomorrow supposed to be better, we'll hope!


Happy Hour! Have a great evening! 🍷🍺

More work and $$ on the Kountry Kitchen! Aaron visits another college! Owen and Cassidy have breakfast with the Easter Bunny! Grandma's home from the hospital!

Well, we made another trip to Lowe's our home away from home right now LOL. This time we went to the one in Fernley, so only about 55 miles from here. We were home before lunchtime.

We decided it was time to get the tin for the roof and what we're doing on the sides of the outdoor kitchen. The checker asked what we were building. We told her and she said good thing we're buying it now as everything is going up! We could tell that just by the prices of the corrugated tin!

We got home and Ken got to work in the horrendous wind we've had all week! Today is no exception!

Thursday morning he went outside to work on the kitchen and discovered we got the wrong post caps for the 4x4s so he had to go back to Fernley Lowe's to return them. I was working on Bryan and Cheryl's taxes so I stayed behind.

He got back and told the story of a young guy in line behind him. Lowe's always asks if you're a veteran or pro customer. The answer is always no to both. The guy says "Here use my card, they f*** ing price gouge us here so use mine".  He swipes his card so Ken got 10% off the purchase.  Where was he when we were spending $700+ LOL.  I told Ken that means he was a veteran as they get 10% and Pro customers get 5%.  What a sweetheart! Russell, thought you'd like that story 💙 Probably a Marine as he talks just like you 😂😂

Yeah, that got me when Ken was telling the story💙

So it was about 1315 when he headed outside to start working on the kitchen. 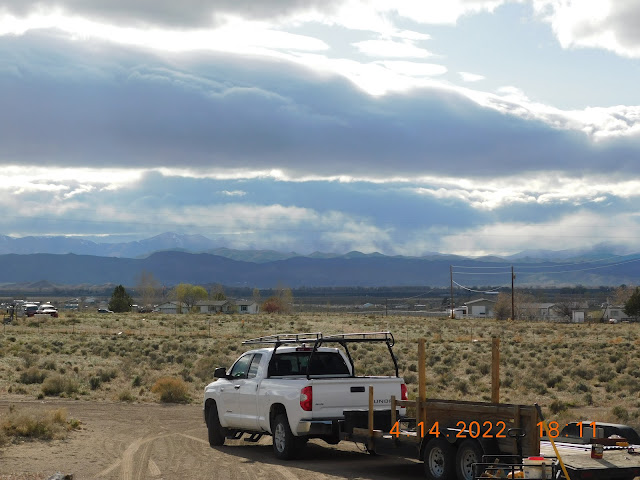