Yesterday morning (Monday) we got up about 0630 and did our usual morning thing.  Coffee, checking on blogging friends and then getting ready. We were hoping to get out at a reasonable time as we were headed to Yuma for some grocery shopping, getting propane tank filled etc.  Well, I think it was about 1030 or so when we left the campground. Not sure why it takes so long to leave but it does. :) 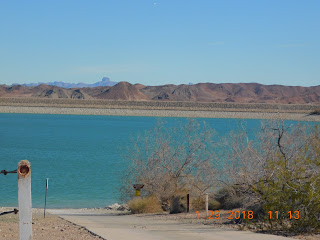 We headed to Fry's and some grocery shopping. That parking lot is crazy! Took us about an hour in there. Topped off the gas tank and Walmart for a few things.  Cannot believe how crowded and busy everything is!  Yuma is sure a long drawn out town!

By the time we were done with all that it was about 1400 way past time for lunch.  We went back to a little diner that is in the same parking lot as a gas station.  We'd seen it many times but never have gone there.  Took us awhile to get there as we were headed the other way and looking for the sign to I 8.  Finally found it and off we went.  Closer to 1430 or so when we sat down.

The Daybreakers Cafe is a cute little place, obviously older but well kept.  They just got craft beer on tap so Ken ordered a tall Deshutes IPA and I had a glass of Chardonnay.  Ken had a turkey melt which he loved and I had a grilled chicken breast sandwich, both came with fries and they were very good!  We were stuffed when we left and both knew there would be no dinner.


One more stop at Amerigas for propane and luckily we got in.  The last vehicle in line and they shut the gate.  Sign says they close at 1600 but it was more like 1530 when he shut the gate.  $2.39 a gallon, so not bad.  After that we were homeward bound.

Got the stuff put away and sat outside a bit.  The wind was blowing hard but the way we have the trailer parked it was fine. Later we watched the news and then back outside.  The evening was beautiful and  the moon was gorgeous! 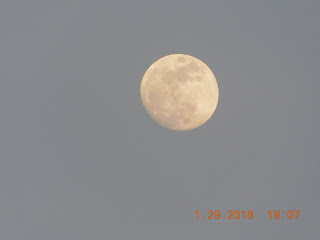 Our son Bryan called while we were outside so I talked to him and so did Ken. He had a cord of wood delivered and so spent part of the day stacking it. Looks good Bryan!

Eventually we called it a night and slept with the windows and door open! Nice. A good breeze going right across the bed so it was awesome!

Woke up this am about 0600, started the coffee and closed the windows and door.  No need for the heater but it was a little cool.  Got Ken up and we started the day catching up with our friends. While we were sitting there I noticed a glow in the dining window..what a sunrise!! Had to get it! 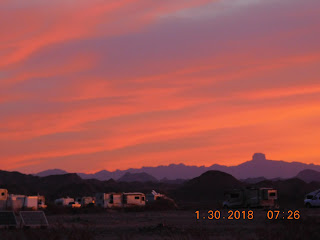 We had decided on a brunch for breakfast.  I had the ingredients to make Ree Drummond's (Pioneer Woman) Tater Tot Casserole. Before we left home we saw her make it on the show and it stuck with us so decided today was the day.  Got all the good ingredients going sausage, onions, bell pepper cheese and the egg mixture.  YUM..all kinds of goodies you shouldn't eat, well the veggies don't count.  haha..


Ken wanted it made exactly how she does it, (I thought there should be more eggs) so that's what I did.  Outcome was awesome just that way.  There's enough left for his breakfast tomorrow and maybe a bit more.


Cleaned house, Ken ran to get some fresh water and now we're ready to see what the rest of the day holds.

Friday morning we got going early as we were going to climb Q mountain! Right as we're leaving Ken said, "You know as they say plans are written in jello/chalk right"..ok..how about if we go by the Big Tent for a bit before we go to the mountain.  Ok that works for me.  So we pulled in, right next to Bill and Patsy and their friends they were meeting Ken and Nancy.  We talked for a bit, (I know they thought we were stalking them).  It was still early but all the motorhomes were open so we walked through the lot. I did go into one of them, because I just had to see...well, $624,000!!  Plus 36,000 in upgrades!  Well, guess that's not gonna happen!  Honestly wouldn't want it anyway, just not us!

But I did find what could've been us but glad we didn't jump into anything. Couple of things we love about our Jayco, is all the windows and our little loveseat across from the dinette.  The retro had the rear bedroom with walk around bed (which I don't have)..and it was so cute! No loveseat, so the only place you would be sitting would be the dinette.  So nope, guess we'll keep our little Jayco and it's paid for. Do love looking though! 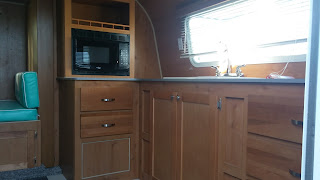 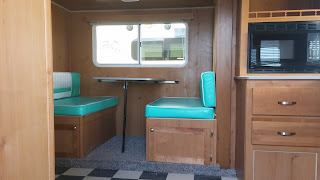 Once the Big Tent opened we meandered our way around and actually found a couple of things to spend our $$ on.  Then we walked over to Tyson Wells area, more looking and shopping. By the time we were out, it was almost 3 hours of walking, so we decided the mountain would wait until another day! We stopped by the post office and gas station then headed home!

Had our lunch and at 1500 we headed over for what we thought would be our last happy hour with our friends for awhile.  Had an enjoyable time as always. Came home and watched the sunset and the International Space Station go overhead at about 1835! Patsy had told us it was going to happen and it certainly did! Awesome!

Ken made a fire out of the last of our firewood from home and he bar b qued a burger for him and veggie burger for me. Yum..

Saturday morning found us sleeping until 0630 or so, then working on getting the morning going.  We had big plans at 1300! Our first Bloggerfest! I made two trays of 7 layer dip for the event.  Breakfast and showers.  Saw our friend Patsy walk by from inside the trailer, but she was on the other side of the road.  Guess she walked back by when I was taking a shower.  Ken came back from  dumping garbage and said he saw her. Missed her both ways, but knew we'd see her at 1300. 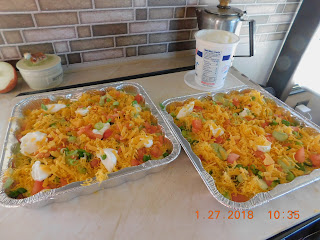 We headed over a little before 1300 and started meeting new people.  Ended up with a group of 22.  Not bad, i'm thinking, even though there were a few more last year I heard.  We visited and learned about each other until about 1530. Nice and informal just the way we like it!

Upon leaving Deb said to me that she didn't know about anybody else but that she and Tom would be outside having a drink. We went back to camp, hooked up the trailer and headed over to their place.  We told them we weren't moving in but we were dumping on the way back to camp.  Ken counted 18 RVs in line for dumping earlier in the day, but we have noticed when we go home from happy hour, there's usually only 1 or 2.

George and Suzie along with Bill and Patsy ended up coming over so we enjoyed ourselves for the last time (well, till the next time).  We headed out after hugs all around! :)  Enjoyed our evening and called it a night.

I have to say we've had a wonderful week, getting to know the people who write the blogs that we've followed for quite some time!  Reading others blogs we're  thinking we know them without meeting them and then when we got to meet them it turns out we're right! We felt like we knew them right away! Writing and reading blogs allow us to be parts of others families and life events and they've become a part of our daily lives and that's wonderful. We both feel we've got new friends for life and our hearts are happy!

(Sunday) Weird dreams all night long..geez..We both were awake at 0500 so here we are getting our day started to move on down the road, a little over an hour to Imperial Dam LTVA. 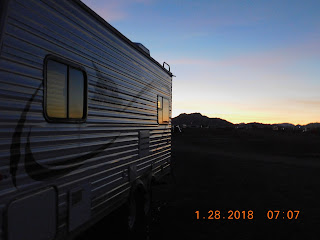 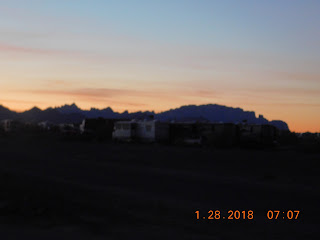 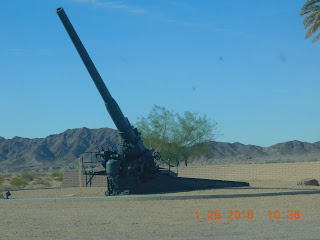 We actually got out early for us, somewhere around 0930! Had a lovely drive to Imperial Dam LTVA.  We found a spot just down the road where we stayed last year.  Got ourselves set up and sat in the warm but windy sun for a bit. Had ourselves some lunch and then ran up to fill the water jug. Can't believe the lake!  It's about half full and the other half is being used by atv riders! Wow what a difference a year makes! We headed back to camp and enjoyed the afternoon.


Tom, Deb, George, Suzie, Bill and Patsy look who's here, just down the road from us! 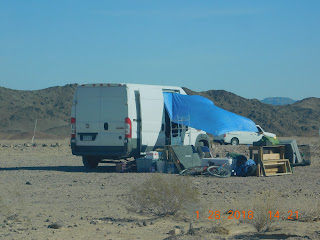 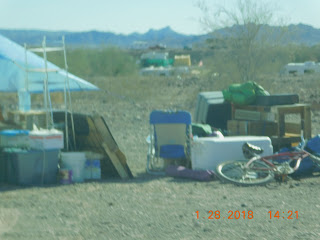 Missing our happy hour friends! :(
Have a great evening!