A special surprise in the mail! Cooking for New Year's Eve

About 6 months ago I joined a crafting page on Facebook. Not because I'm crafty, I am NOT. I just wanted to see what other people make and maybe sell. I saw a beautiful hand painted flag that a woman and her 5 year old nephew made. I asked if they sold them and she said no they didn't.

A little later she messages me and tell me she and Austin had a talk and decided to gift me with a new flag they were going to make.

Wednesday I got a message from her telling me to check my mail. It didn't come until later in the day but this was the sweetest surprise ever! I can't stop looking at it! I am just amazed that a woman and a little boy from Kentucky would do this for me. 💖💖 She is very proud American and proud of our Marine and Sailor too. Thank you, Thank you  Austin and Jen! We will find a special place for this masterpiece! 💗💗  I know this took hours and hours to do. She told me she and Austin had so much fun making it! 💙

Later we went to  John and Karen's for Happy Hour. We spent the evening on the back porch under their propane heaters. Nice and toasty.

Yesterday morning we were surprised with a light dusting of snow, by 1400 it was all gone! If the weather guessers are right it looks like New Years Eve will be a wet one, if not a white one. 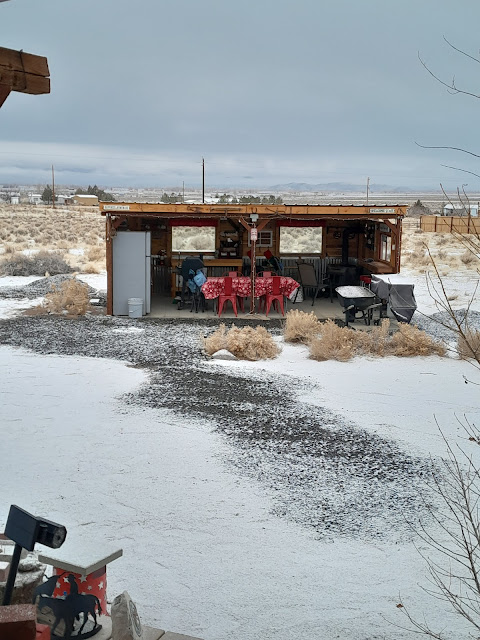 Last night we had a nice fire outside along with a happy hour or two with adult beverages.

Today was all about cooking. We're going to John and Karen's for New Years Eve. Tradition you know.  I made 7 layer dip, sausage cheese balls, 2 ingredient fudge and mexican wedding cookies along with our good for us banana bread. Glad to be done! Ken's making great northern beans /black eye peas with the ham hock left from Christmas. He'll cook that in the dutch oven tomorrow.

Ken gifted himself with an Emeril 360 Air Fryer, Convection,Toaster Oven with french doors and rotisserie. He's getting to be quite the chef with his pit boss, griddle and now this new toy. Spare Ribs were excellent!

Jacob's on the plane headed back to Italy today. Seth and Holly will be heading back to Oceanside this afternoon. It was awesome seeing them for the short time we were able! 💗

Have a great evening! Tomorrow we celebrate! LOL!

A wonderful Christmas 2022! We're home to rain and wind :) A fire going in the outside kitchen! :)

Christmas morning we got up and got going to be at Eric's around 0730. Caught him outside cooking bacon and sausage on the griddle. Sure smelled good right then.

Went inside for some hugs and then I got the sausage gravy heating up. Christina had already made a big yummy bunch of scrambled eggs.

Presents were opened by everyone and then we all ate our awesome breakfast! 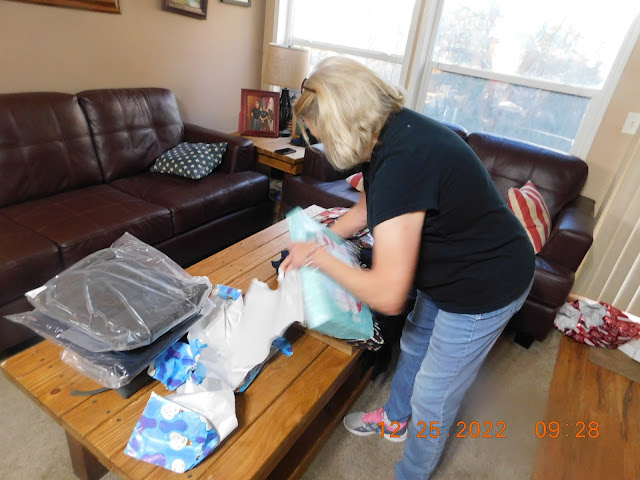 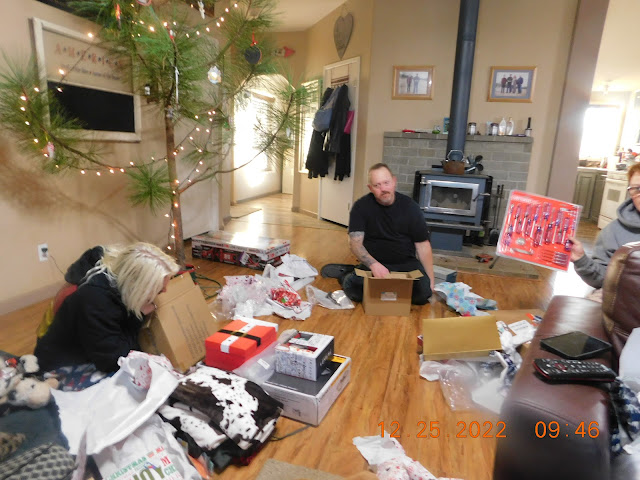 Around 0930 we headed down the hill to Russell's house. It was pretty quiet there after Christmas Eve. I got some munchies out while the house woke up.

A little later I made some brisket egg sandwiches for anyone who was hungry.

Jacob and Allissa had been to her parents so once they came back presents were opened. Our kids and grandkids treat us way too well! 💙

Eric, Christina and Mason came just as we were finishing up. Bryan, Cheryl and Adam got there a little later. Others filtered in throughout the day. Such a wonderful feeling getting together with them all. 💗 It was really special to have our five grandsons (Holly and Allissa too) all together under the same roof once again! 💙 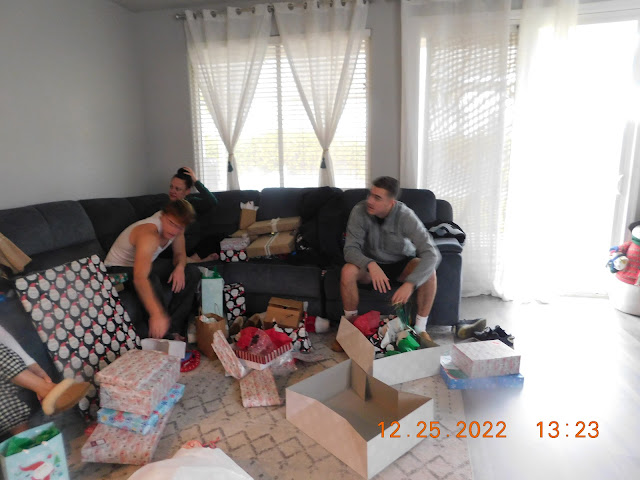 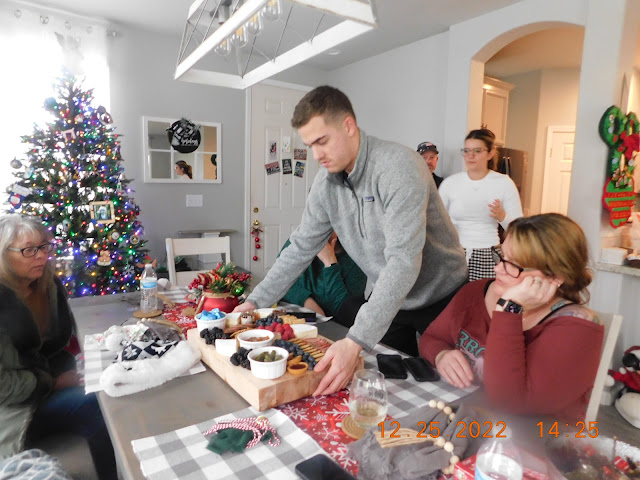 Later in the afternoon we headed out to see Ken's mom.  Bryan, Cheryl and Adam were already there. Diane got there a bit later.

A nice visit and then back to the hotel to call it a night. It was an early night. 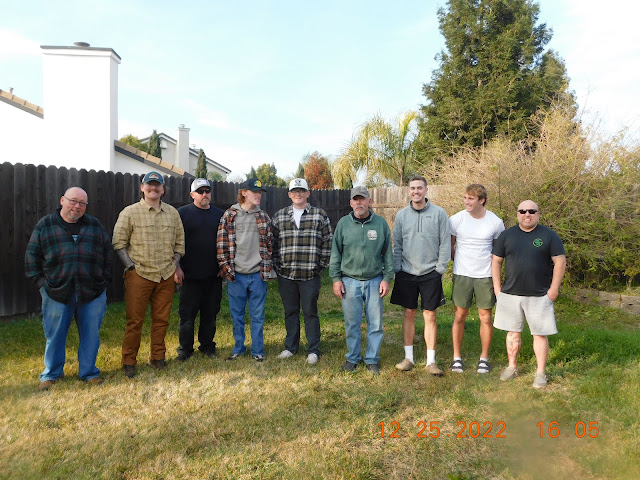 Our sons ( which were our first pride and joy!) with their sons and
Bryan, Adam, Eric, Mason, Seth, Ken, Jacob, Aaron, Russell 💙💙

Monday morning we ate hard boiled eggs and toast in the room before heading back to Kens mom's house as I forgot my camera there. A quick hug and we were headed for Rio Linda to load the trailer with wood that KC wanted to give us. Ken worked while I visited with Sierra and Rylee. I did feel bad keeping her from what work she needed to get done. We did have a nice visit though. 💖😊

Finally we headed out and started to go up I-80. Before Sierra College traffic slowed to a standstill so we got off and headed over to Highway 50. Yes, there was traffic but nothing like 80. We pulled over at Fresh Pond and got out salami and cheese for a late lunch. Then home around 1700.

Karen had called to make sure we were ok, and invited us over to Happy Hour. We unloaded what we needed to and then headed over. They were on the back porch with the propane heaters going so it was nice and toasty.

Woke up to middle of the night to wind and rain. Lord knows we need it here! Now we've got partly cloudy skies and wind and more wind!

I love seeing the kids and grandkids, wish it didn't go so by so fast though!

We always tell the kids we don't need anything, we buy what we want. Do they listen?! NO! LOL...

Our Christmas visit to Joanie along with a surprise visitor! Christmas Eve at Russell's! Merry Christmas!

Thursday and Friday  were spent mostly cooking. I was getting things ready to take over to Russell's house so they'll be ready on Sunday. Ken worked outside most of the day, because he's tough!

Saturday morning we left about 0730, later than we planned but oh well. Had a lovely drive down I 80 to Rio Linda where we dropped off our little trailer at KC and Sierra's. KC is sending us home with firewood on Monday before heading home.

It was time to head for our friend Joanie's place in North Highlands.  She's 99 now and we make a point of visiting every Christmas.  Today there was an extra special visitor going to meet us there!

Every December 23rd I call Don Devlin to say Happy Birthday! Don was always everyones favorite captain when we were working. In talking I mentioned we were going to see Joanie Saturday.

He wanted to see her too so I let him know it was going to be around noon when I had a better idea of timing. After us greeting Joanie for a few minutes the door bell rang.

We told Joanie she needed to get the door. Boy, was she surprised!! Hugs all around! 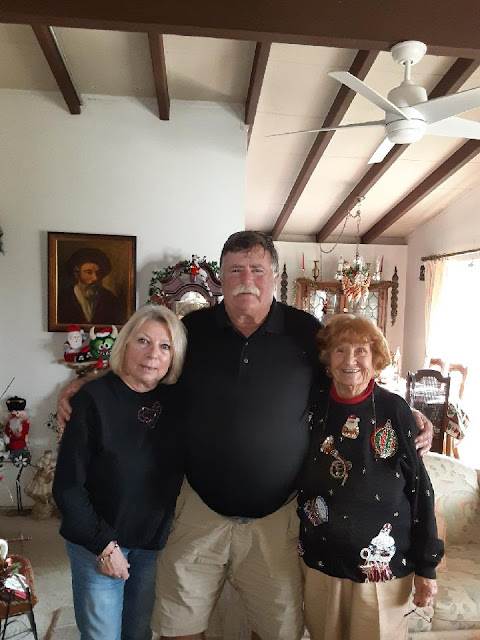 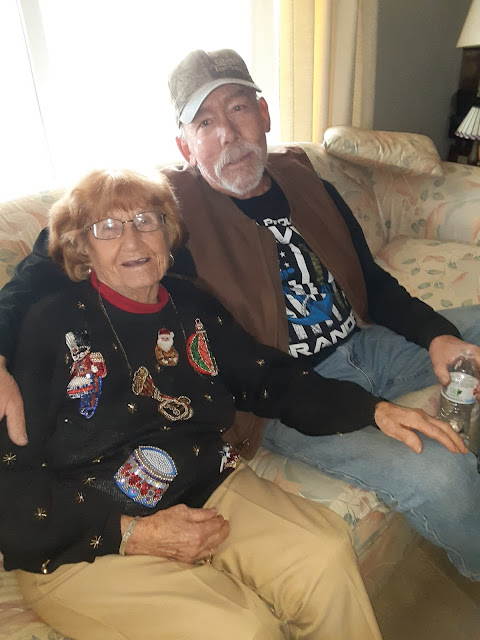 She is the ultimate hostess at 99! She had beers for the boys, wine for us girls and goodies put out on the coffee table!

It was like old home week, had no problem with conversation 😀 It seems like it was just yesterday we saw each other. After about and hour and half, Don needed to head out, and so did we. We'll all see her in August when she turns 100!

We headed to Russell's house and proceeded to have a great afternoon there. Russell cooked an amazing brisket and a spicy try trip :) 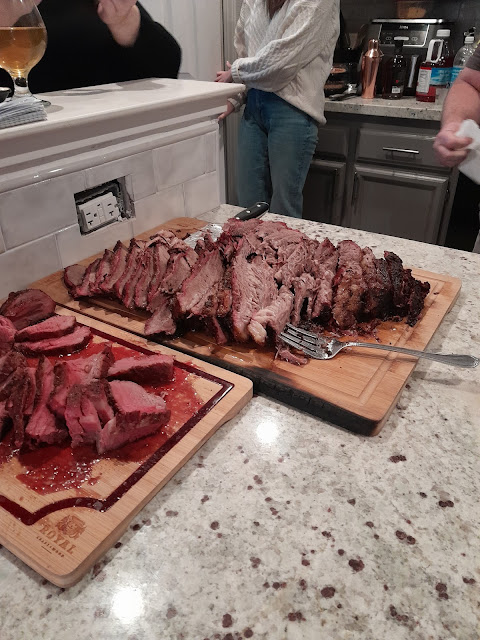 Visited for a few hours and then it was time to head to the hotel so we can be comfy and call it a night! Boy these days go quickly! 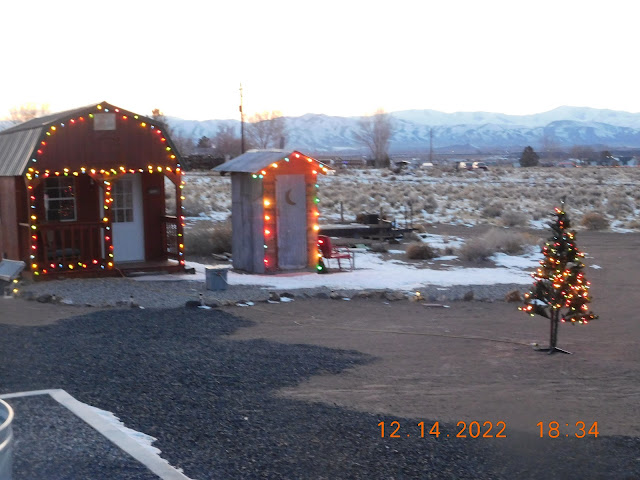 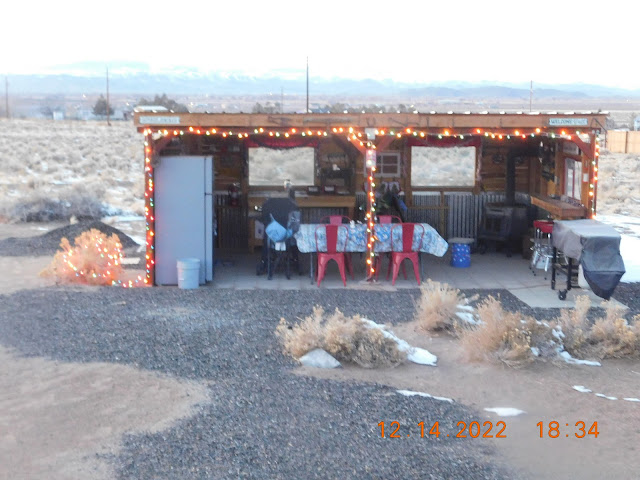 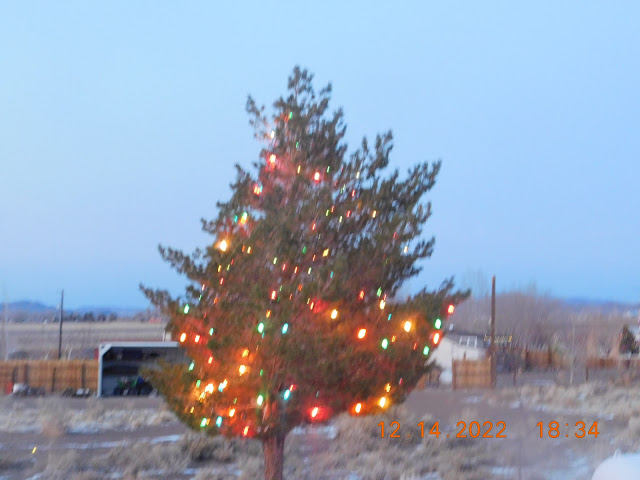 Thought I'd get this posted last night, but was too tired! Now it's Christmas morning and time to get going. Going to post this quickly, get coffee and head up to Cool to see Eric's family and what Santa brought them. 💗

Then we'll head to Russell's once again for another great meal and visiting!

It's looking like we'll have all 5 grandsons under one roof today! One Happy Grandma here!!💙💙💙💙💙

Have a wonderful day! Merry Christmas!