Yesterday morning (15th) started out in the kitchen with breakfast for the boys. Seth and Mason love these pancakes!  So that's what grandma does!  Way too sweet for me, but they're young and thin!

I ran over to Susan's to do some finishing painting on the cover where it had gotten scraped or scratched.  Wow! What a difference a simple cover makes.  She was thrilled beyond happy!  Ken told her he worked for a case of beer, but she added some cash and wouldn't take no for an answer.  Such a sweet lady. 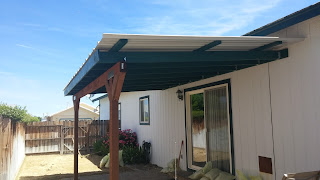 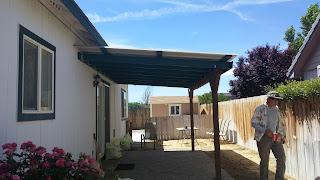 I ran to Scolari's (again) on the way home and by then Aaron was up and around.  He hadn't eaten anything, even though I left pancakes and bacon for him.  So since it was around 1230 I made sandwiches for the boys. Salad for us.

Hot afternoon, so after cleaning the kitchen I didn't do much.  The kids played video games but you could hear them laughing in the bedroom, so who knows what they're playing.

Adam was driving over from CA so he arrived about 1730.  Ken started the bar b q and made his famous Papa Burgers!  I made some oven fried fries and the boys enjoyed a good dinner.  Ken made ours after, which made for a late dinner.

Adam was going to drive up the mountain for a sunset pic, but ended up at the end of the road and took some nice pics from there..I'll have to get him to send me one, so I can post it.  We took a few of our own here. 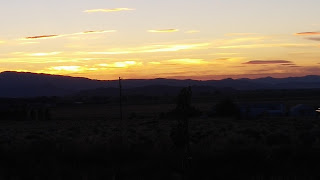 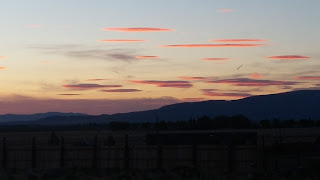 This morning, it's gonna be a warm one.  Ken's running to Gardnerville to put some $$ in his account and we'll be here. Talked about running over to the fish hatchery today and checking out the North Pond with the boys, after he gets back.  These warm (hot) days don't do much for my energy levels.  So we'll see.  I can see by the cookie jar, i'll be making some cookies this morning before it gets too hot.

Seth leaving his driveway for his first 2 hr driving
lesson..

Christina took the boys to breakfast so she let Seth drive some in the canyon.  She said he did well..
Have a wonderful day, I'm sure we will.
Posted by Ken and Shirley at 8:02 AM