Another letter from Seth! One day turnaround to Winnemucca..

Well, it's Thursday and again where has the week gone!?  It's been a good week but really cold.  We woke up yesterday to 7 degrees here.  This morning a balmy 12 degrees.


We were going to be meeting Tom and Deb in Winnemucca yesterday but with the cold temps it was decided that they needed to find warmer temps so the plumbing doesn't freeze.  We've dealt with that before in Winnemucca and it's no fun!  Winnemucca was 2 degrees with a feels like -11. No thank you. We're planning to meet up in Death Valley this coming week :) Should be much warmer :)

I was thinking we wouldn't have time to do Death Valley, along with being in Sacramento next week and then San Diego not long after that.  Ken looked at me and said, "You know what Dr. Halow said, Go live your life, so let's go"  OK, He/you are right!  So we're going!

We got the truck serviced this week and they found the front brakes needed replacing so more $$  were spent than originally thought. We don't have a truck payment anymore, and this was less than that. We did some running around and then headed home.  One stop was Verizon where I finally bit the bullet and got  a new phone.  Mine has been dying for a while, but I hate learning new things haha.  We went back Tuesday to pick up the truck, and  I was able to get a little Christmas shopping done.  I made a list last week and decided I better get shopping, at least for the young ones.

Wednesday was a baking day.  Ken bar b qued some delicious boneless pork ribs and mashed potatoes were made to go with them. Yum.  We took some over to Karen as she was home alone.  She had started a fire outside, so we enjoyed Happy Hour over there.

This morning (Thursday) we sat the alarm for 0400.  Left the house at 0600 and had a beautiful drive to Winnemucca.  We got there just a few minutes after 0900 and stopped in quickly at Walmart.  Then to Dr. Robbie Grant's office. 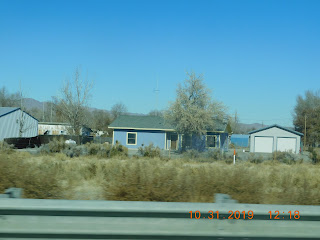 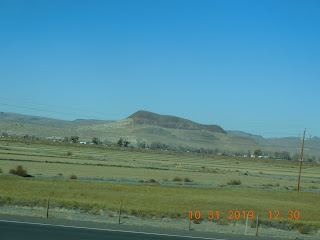 Pretty much got in on time and the dreaded weigh in.  Few pounds less (YAY, I'm sure it would be better if I didn't like my wine! But ya gotta live, right?!) 28 pounds less than in 2010 when I started seeing her. All the lab tests were good!  Glucose # a year ago was at 106, then 100, 93 and today 92. She was happy, Ken was happy and so was I!  A lot different than when I'd leave her office tearing up because it seemed nothing was working for me.  She said to keep up the lifestyle! I'm going to miss her in a year and two months when I turn 65 as she doesn't take medicare. :(

We left there happy and at Fernley, NV a little after 1300 we pulled into Pioneer Crossing and had a celebration lunch! Yummy!

The house was cool when we got home so Ken started a fire.  Now on to Happy Hour!