Another beautiful day in Yerington, NV...

Yesterday morning I got a call from our Grandson, Adam.  He had worked his first shift at American River Pizza and he was a happy camper!  He worked from 1630 to 2200.  He said because he worked so well, he got $10.00 in tips.  Normally they don't split the tips with trainees, but he got some..woohoo Adam.  We'll see how he feels this morning as he was working about 7 hours yesterday.

He's been working furiously on scholarship apps as most are due at the end of the month.  Let's hope some work for him.

I ran to the grocery store and picked up a few things.  I really need a Walmart run but trying to wait until we're almost ready to head for Tennessee..

Decided to make some spaghetti squash spaghetti for dinner last night. We hadn't had it in quite awhile.  I cooked up some ground turkey breast for Ken with some veggies in it and I had the vegetarian version..Yummy!  Thanks to George of Our Awesome Travels for the recipe!

After taking the Money Pit (97 Ford) and cabover to Winnemucca last week, I put some new flannel sheets on the bed for this week.  Never could get warm in the regular sheets last week, even the heater blaring full blast.

Ken took care of getting wood on the front porch, so he had a lot of bark that he put into the fire pit out back.  So of course we had to have a nice fire late yesterday afternoon.  You know that always gets us into trouble..hahah..couple glasses of wine and a nice fire..well.. 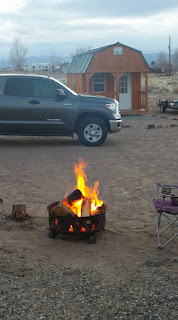 We were out in the bunkhouse yesterday afternoon, and it's so cute.  Decided I think, we're going to spend tonight out there just for fun..Mr. Heater does an awesome job of keeping it warm.

So this is Sunday morning, warm and toasty inside...25 degrees with a feels like 20 degrees outside...thinking I'm staying inside most of the day!


Christina sent a video of the boys singing "The National Anthem"..the speakers didn't work at the field so the boys sang it..awesome! I can hardly ever get the videos to play on here..but here's a pic.. 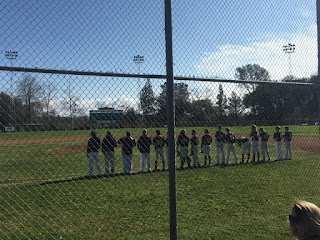 This pic popped up on FB again, so I have to share it again..


Guess it's time to do something before another day bites the dust..I'd really like to go for a drive..but since we'll be doing 400 miles this week, i'll save it till we head for TN...Have a wonderful day!
Posted by Ken and Shirley at 7:49 AM