Saturday morning I woke up in Antelope, CA at Russell's house.  I got up and made a cup of coffee in Lori's Keurig and I have to say it was delicious!  She's the only one in the house that drinks coffee so I can see where that would work well for her.  Found 3 boys asleep on the couch, Jacob was the only one who went to his room for the night. 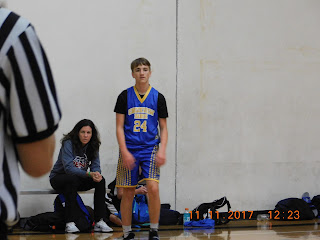 Once it was over we headed back to Antelope so i could get Jacob to his basketball practice in Roseville, CA at 1100.  We dropped him at 1015 or so as we had to be back in Rocklin for the second game at 1040. Again, win win! 42-13 or close!  Aaron played in the first quarter but then because it was obvious they were going to win, the coach put in players that don't get to play very often.  I like that about a coach, how else are kids gonna get better if they don't get to play?  These games were for the middle school Aaron attends.  Russell texted yesterday afternoon as Aaron had 1 more game and they were the champs 3 of 3!!

Ok, now we're done and hungry.  I stopped at In and Out for the boys and I got a salad at Wendy's so we went back to Russell and Lori's to eat and then to pick up Jacob at 1500.  Once that was done came back to the house for a bit until it was time to head for Owen's birthday party.  Jacob thought he'd stay home and play his video game rather than go there or up to Cool after the party.  (His parents changed his plans for him and he had to go to a family party with them for his cousin Marissa) hah..

The rest of the boys and I headed for Mark and Monica's Pizza in Carmichael and celebrated Owen's 3rd Birthday.  That boy is a cutie!  He greeted everyone and took their package and opened it right away.  I like that as each person sees him open a gift and the excitement in that little one.

Visited with family and friends and then it was time to head up the hill to our middle son's home to spend the night.  Eric and Christina were sitting outside enjoying the night and a fire.  Eric fixed me up a glass of wine and I joined them.  A little while later he fired up the 61 Chevy Impala we gave him a few years ago.  He's been working on it and it runs smooth.  Cosmetic work and a little electric work is still needed but it's going to be wonderful.  He took Mason and me for a ride on their private roads just to show me how good it runs.  I told him i don't think I've been in that car in 30 years or more.  We decided a few years ago to give the kids what they want now rather than waiting until we die, otherwise the 61 would still be sitting rather than getting worked on. Much better choice we think.  Same with the 76 Jeep we have, Russell will be getting that at his home soon.  Bryan has gotten a few things as well.

Woke up in Cool yesterday and after Eric got off to work, Christina, the boys and I headed for Auburn and had a great breakfast at Sierra Grill.  Then Aaron and I said good bye to them and I took Aaron back to Antelope.  Had a nice little visit with Russell and Lori and back on the road around 1000.

Nice drive to Reno and then to Gardnerville where I picked up 2 prescriptions we need.  Got a 20 pound turkey for Thanksgiving too.  Stopped at Scolari's in Yerington to pick up another ham, because they had them for 99 cents a pound. Finally, home!

Ken had gotten the water service dug, connected and buried while I was gone. So we sat out back by the new outhouse and actually it got used!  Awesome to have a working bathroom back there!

After a few hours we came inside and I threw together some tacos for dinner and that's all she wrote! Bedtime!

Woke up in my own bed this am about 0430 and woke Ken at 0500 with coffee. Joe came over last night so we're meeting in town for breakfast at 0815.  Then we'll come back here and get ready to head for Winnemucca as tomorrow is lab work for my doctor  appointment after Thanksgiving. Time to get ready.  Have a wonderful day!
Posted by Ken and Shirley at 6:50 AM