My favorite picture of the trip. This was taken at Mather Point Overlook at Great Basin National Park NV...

Monday morning I got Seth and Jacob up as we decided to go fishing at Topaz Lake.  Because Topaz is in both CA and NV the boys don't have to have a fishing license until they're 16.  We had breakfast here and then headed out.  It's only about a 40 minute drive or so we were there around 0900.  The lake was unbelievably full!  We were just there a couple of months ago but now trees were under water!  They fished awhile and then we moved to another area, bugs like crazy so they didn't last long.  We drove a few miles down the road to the CA border and found the river, they tried that but it was moving fast and no luck.  They seemed to enjoy anyway and we were back home in time for lunch after a quick stop at the grocery store. They watched a movie or two, played video games and I made some Super Burritos for dinner.  This is something I made for their dad's when they were teenagers.  Then on to bed later as we were getting up early on Tuesday as it's time to go home. 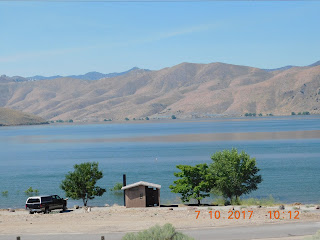 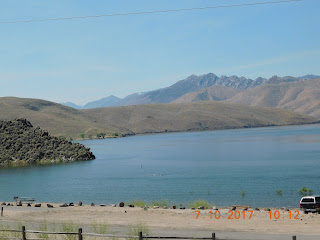 Yesterday morning (Tuesday) we woke up about 0400 and had our coffees and computing.  About 0530 or so I woke the boys to get them going as we wanted to be at Dini's for breakfast before we headed out.

I have to say normally Dini's is quick service, but yesterday quite slow. Food was delicious as always but we didn't get out of there until almost 0730.  Oh well, pretty much I know that when I do the drop offs or pickups my day is usually done by the time I get home. Hugs good bye and off we went.

When we got to Hope Valley (that's my favorite part of the drive) I asked the boys if they wanted to spend a little time fishing.  Jacob and Seth were all for it! Mason still enjoyed the time outside and Aaron used the back seat for a bed as he was sleeping.

After about 40 min or so and no fish we headed out to continue the drive.  When we got to Citrus Heights we decided to go to Dairy Queen and they wanted Blizzards.  They ate them there and then continued to Jacob and Aaron's house in Antelope.  Dropped them off and then up the hill to Cool.  Christina was home so I visited with her a bit and then another 9 miles or so to Georgetown and a short visit with oldest son, Bryan.  Cheryl was working so just Bryan and the dogs.  It was around 1500 when I left there.  Headed down towards Coloma and then Placerville and back on Highway 50 home.  I got home around 1830 or so.  Beautiful drive, just too many people. Placerville was backed up for a mile or so with people heading down the hill.  Luckily I was headed the other way :) 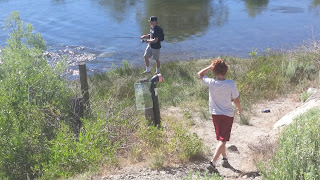 Ken had gone to the doctor on Monday for his hernias and the surgeon called right when I was getting in the truck at Bryan's.  Gave them Ken's number and he has an appointment on Monday at 1300.  At least this is moving quickly as its really painful.

Today, July 12th we stayed home all day.  Bedding washed and put back on the beds, rooms cleaned and all back to normal.  The day flew! Salads for lunch and tacos for dinner again.  I think I made too much fixings when the boys were here.  We don't mind leftovers, especially Mexican.

Tomorrow, who knows but i'm sure there's projects to get into.

Some pics the boys sent me..you'll have to click on them to make them bigger.. 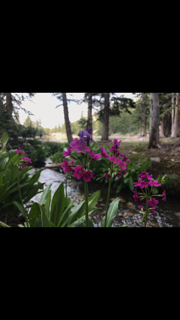 Adam's selfie after reaching the top of Wheeler Peak..

This memory popped up on Facebook...it says 2014..Wow how these kids have changed!!