Jacob's promotion pinning.. Doug and Michelle visit! The back porch is done..

Jacob had his promotion ceremony on Tuesday in Italy.  💖  He sent me these couple of pictures (so did his dad).

Tuesday,  we got a text from Doug and Michelle that they were on their way from Topaz Lake! About an hour later we saw them coming down our road with hands waving from behind the window of their beautiful blue motorhome. Reminds me of Tom and Deb's Stinger B..you can't miss it anywhere!

We had them pull in next door at the J and K Rocking Ranch RV Park. John and Karen have some RV spots with water/electric and 50/30 amp.  Because of the temps nearing and over 100 degrees it was nice they offered up the spaces.  WE took the Mansion over a few days before. 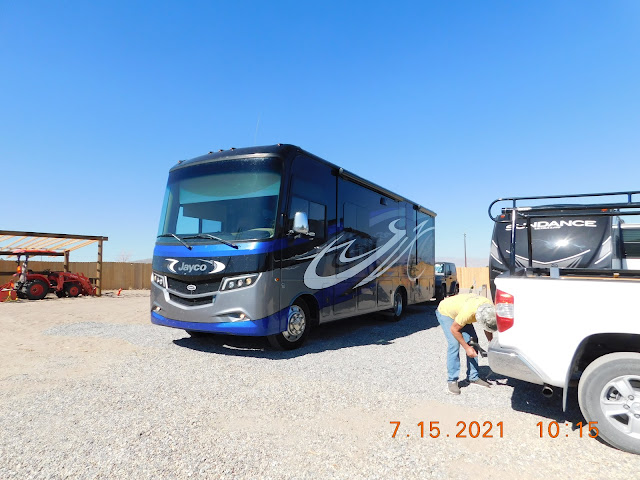 After some hugs and visiting we took them over to our house for some sandwiches and cooler temps.  They brought me 3 bottles of wine and Ken a twelve pack of his favorite IPAS.  Very sweet of them 💗

Then over their way for the start of Happy Hour 💖🍷🍺🍹 Later we joined Karen out back so Ken could cook up some chicken. Enjoyable times. We went back to the rigs later and a text for "nightcap?" came through...over we went, of course!  😁

Wednesday morning we had invited them all over for some breakfast burritos. 0900 was the time and the goodies were done just a few minutes earlier. Everyone enjoyed making their own burrito.  More conversation just flowed!  We made plans for a little later to take them to see the sights of Yerington 😊😂

Just about 1115 we piled into Ken's Tundra and off we went. IF you've been to Yerington, you know the tour doesn't take very long LOL.  The town of Yerington is just a little main street. We did go out to the dairy and that was interesting to see. Wish they did tours, that would be fun (not on a 100 degree day though).  They didn't realize we are, "The onion capital of the West". I'm thinking they saw more onion fields than they ever need to see again 😁

A little after 1300 we pulled into El Superior for what turned out to be linner.  More conversation flowed.  My taco salad was delicious. Doug is looking for the best fish tacos and these didn't live up to his expectations, but they were good. Keep looking Doug! They like Rubios in San Diego. Thank you Doug and Michelle for lunch! 💖

After lunch we drove down Main Street and saw Karen's truck was still there.  We pulled into the parking lot, saw Karen at her favorite machine inside and then went over to The Cellar and had a couple of 🍻🍷 there.  Ken and I have been there a few times but not in a few years,  so this was nice with friends. We headed home after that.

We all retired to our respective rigs and just before 1630 got a text that Happy Hour had started next door! Be right there.  It was an enjoyable evening and too much wine was drank LOL..sure was fun though!

Thursday morning we had them over for more burritos as there was plenty left from the day before. I made up some more eggs, but really didn't need too. Conversation flowed as it has for the last few days.  Karen came in to tell them good bye. All too soon it was time for them to hook up and go.   They were headed for Beatty, NV as their destination for Saturday night. I like their way of thinking..they don't like driving over 4 hours a day! Sounds good to me.

We probably never would have met this couple if it weren't for blogging. He read my blog a few years ago and when they were in Carson City reached out to us.  We met for the first time there and had lunch at Carson Valley Inn. We've seen them a few times in AZ in the winters after that. They like to go for sure!  They're just coming off a two month trip and we were finally able to make it happen that they got to spend a few days with us.  Gotta love when a plan comes together! 💙

After they left, we headed for Carson City Lowe's to get the 3 pieces of tin to finish the porch out back. ($120.00) As long as we're that close might as well order and pick up at Total Wine in Reno.  Back to Carson and Betsy's for linner.  A little later we headed over for a visit (Happy Hour) with Karen and to thank her for having our friends and us there for the past couple of days. 😊

This morning (Friday) after visiting with blogging friends Ken went and got the Mansion from next door.  Breakfast and then he headed out to get to work on the tin. We have a back porch again as of this afternoon! 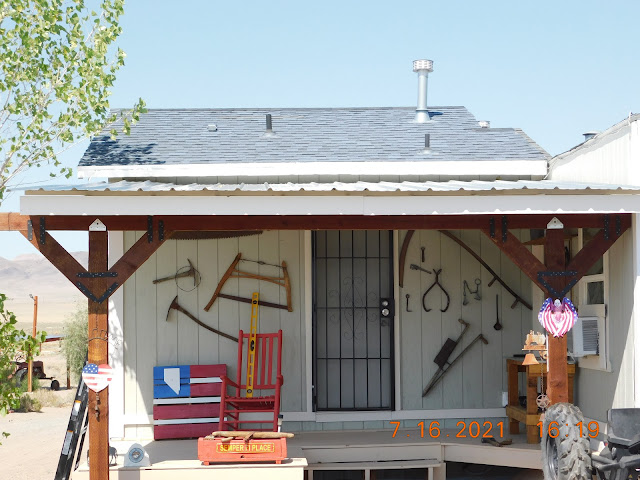 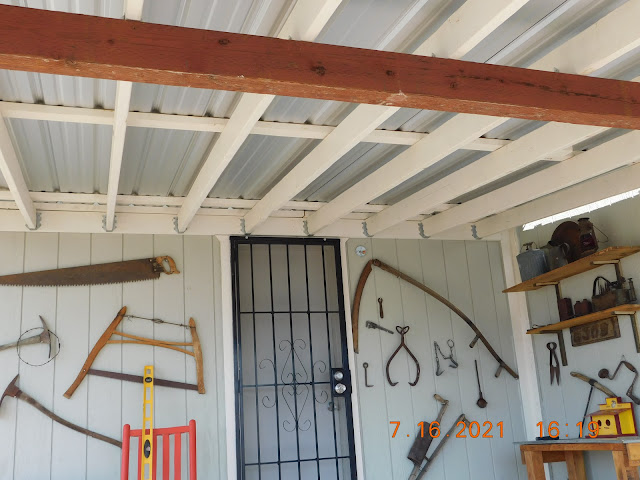