Boys are coming..61 Chevy pics..my bookshelf and the loss of a special friend

Brother in law Don in Tennessee sent these pictures while he was doing some mowing. I told him he was making me "homesick" for our second home there! This time of year he's mowing every week or more, but isn't it beautiful! 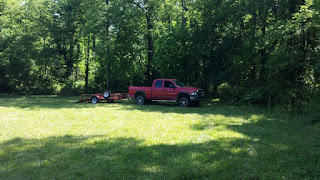 Monday evening we were just enjoying the evening out by the bunkhouse. We got a text from our neighbors John and Karen to come over for bar b q hamburgers.  We declined on that as we had leftovers but said we'd come over for a drink. They had been working on their backyard and installed a beautiful walkway. I forgot my camera, but will get it next time. So we visited out back and then it got cool so John started a fire in the fire pit. By the time we got home it was just about 2300! How did that happen! We ate a very late dinner (which I should have known better) and then headed off to bed.

Tuesday was a stay at home day other than running to the Raley's in town. I really don't like that store compared to Scolari's. Too bad they got bought out. Raley's is only carrying organic lettuce and lots of organic veggies. Basically organic = more expensive. I just can't seeing paying $2.97 for a head of lettuce. I still managed to leave a nice donation..uhhh..

Ken worked on my bookcase for the living room. It's just exactly what I wanted. Nice and simple. I had some steel wool and vinegar in a coffee can so that hopefully I can age it to the color I'm looking for.  As of Wednesday I've got a few coats on and still a few needed. It's going to be perfect.

Wednesday morning we decided to head for Gardnerville and Walmart. We weren't in a hurry this am as really that's the only place we needed to go before we headed to CVI for our lunch fix. We both managed to spend a pretty penny at Walmart. Lunch was awesome as always other than Carmen is on vacation for about 2 weeks. Really?! Service was still good as was the food!


We left there and I promptly took a nap on the way home. I never used to sleep in the car, but paired with all that food, wine and a restless night's sleep last night it was the perfect storm. It's in the high 90's so as soon as we got home we turned on the a/c. Much needed. It's 98 degrees right now.

Aaron and Mason have texted and they wanted to come back here for some time, so I figured i'd head over tomorrow morning and pick them up. Christina called and said that Seth wants to come too, so he'll bring them over in his jeep.Nice, we'll have 3 of them for a bit. We're planning on Monday heading over to Bridgeport, CA and camping for a couple of nights. The boys can go fishing and they all like that campground. Hopefully there won't be a problem finding a spot. After we're done there I was going to take them home, but it looks like that'll be Seth's job now. Of course things are subject to change but that's where it stands right now.

Eric sent these pics of the 61 Chevy Impala he's restoring.  Found the new tires and wheels on Craigslist and the stock hub caps he bought last year. Slowly but surely it's getting there. Runs like a champ now. ;) 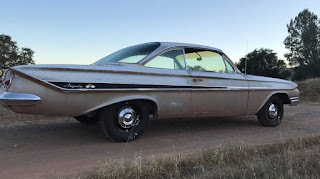 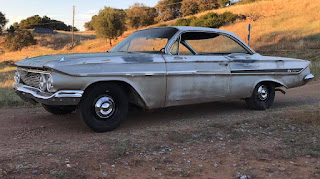 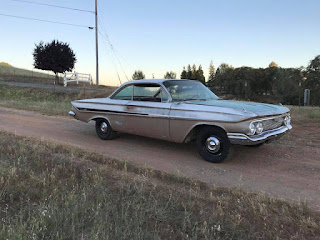 Yesterday afternoon we got some sad news that one of our friends had passed away. Pam and Dave found each other about 10 years ago and had a wonderful love story. Pam was diagnosed with cancer in October and yesterday she went to heaven. Ken talked with Dave this morning and he said Pam was ready to give up the fight, there was just too much pain :(   Sure do hate that cancer word.

Have a good evening everyone!