Smoky days, Unexpected appointment, life gets in the way of painting

Tuesday morning we headed for Carson City.  Air quality was bad from the CALDOR fire that started over the weekend in El Dorado County California.

( I kept forgetting to grab the picture off FB)

We needed to spend some money at Lowe's LOL.  We got another 5 gallons of the green paint for the house and 2 gallons of the white for the trim along with some more roller covers.

Then we headed for Minden and Raley's for a prescription pick up.  A quick stop at Walmart, (I didn't go in) for just a couple of things then to Sharkey's for linner before heading home.

Heading down highway 395 the smoke was horrible.  Instead of being 1545 in the afternoon it looked like the sun was going down. We've never seen it this bad.  At our house it was even worse. 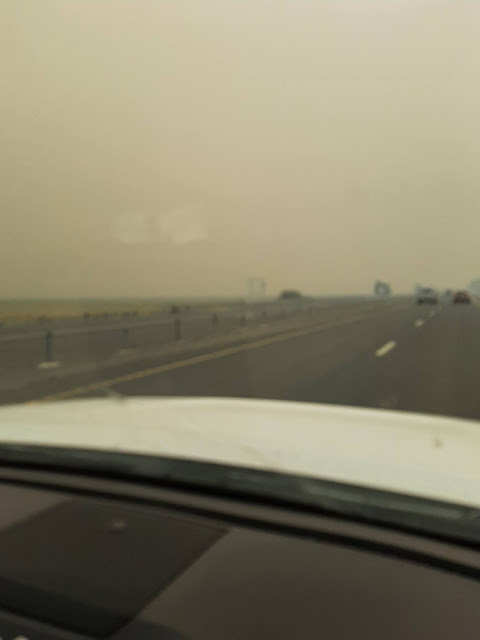 The UPS guy said it was eerie and that's exactly how it felt.  Something out of a horror movie LOL.

We headed over to John and Karen's to stay the night with the puppies. They are always so happy to see us! I had my new SIM card but didn't feel like dealing with it then.  We watched a couple of movies and called it a night.

Yesterday morning (Wednesday) we got up early and headed home. It was paint day. The temps were cooler so we were actually looking forward to it.

We got the back wall and part of the front done up to the porch.  It was a good days work.  If all we had to do was roll it, it'd go a lot quicker.  Again with prep work it takes a lot longer. 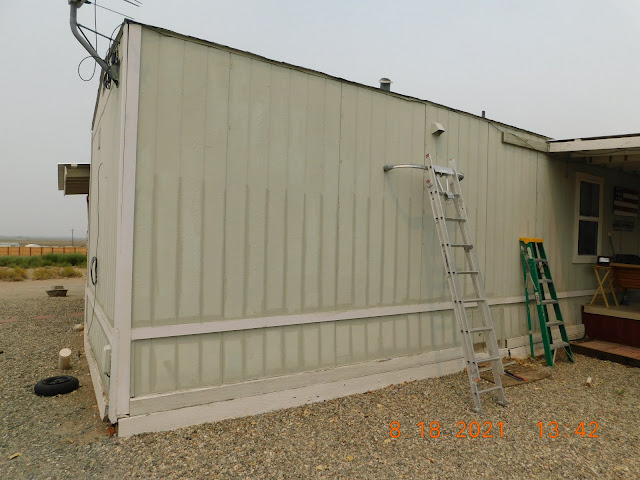 Once we finished about 1700 i took a shower and then we headed next door for Happy Hour. I actually put on sweats and took a jacket. Of course Ken had to start a fire in the fire pit and send a picture to John. Got a call right away, he was jealous. Ken did it more to get a rise out of him, that's what friends do right?! It did feel good though.

This morning (Thursday) we awoke to the coldest temperatures we've had in months! The heater we leave programed for 50 degrees actually came on!

We were planning on painting today but we got a text from the podiatrist Ken's been waiting since June to see.  They had an opening at 0900 this morning. Plans changed and off we went at 0645. I made a couple of egg and cheese burritos to eat on the road as it was a 70+ mile ride to Carson City.

He went in and came out with 1 1/2 less toenails. Hopefully the pain he's had will be done once it all heals. The doctor took 3 x rays and pushed on the side of his foot and asked if it's tender.  Yes it is.  It's broken. The end of a bone is broken off and being held by a tendon. This has been this way for at least 12 years. When we were working his foot was hurting, he went in to Kaiser. His doctor said it's broken and then called back the next day or so and said it wasn't. Weird huh? Nothing was ever done about it. This Dr said they can do surgery but he'd be on crutches for about 6 weeks. Doesn't bother him enough to go through that. He has an appointment in 2 weeks for a follow up.

We came home, had lunch and then a little house cleaning since it wasn't going to be a paint day after all. Tomorrow won't be one either as he's got his glaucoma appointment in Reno at 0830. Then we'll do some running around.

The air is pretty clear here today but the fire is still growing (65,000 acres) with no containment. Too sad.

Temps will be warming up starting tomorrow. Happy Hour time! Have a great evening!