Friday morning we left here close to 1000 hrs and eventually arrived at the camping spot around 1400 after a few stops. We saw another RV was there and we found Rose and Fred Sanchez (Steve's parents) sitting in the shade of some pine trees. The only shade to be found that time of day.

Grabbed our chairs and sat with them awhile, catching up.  Eventually more people showed up and things started happening. Steve had brought up a porta potty for the tenters and guests earlier in the week.  They rented a little U Haul for tables, generators, barbecues, food etc so that had to be emptied and then later someone ran back to Pollock Pines to pick up the rented chairs. 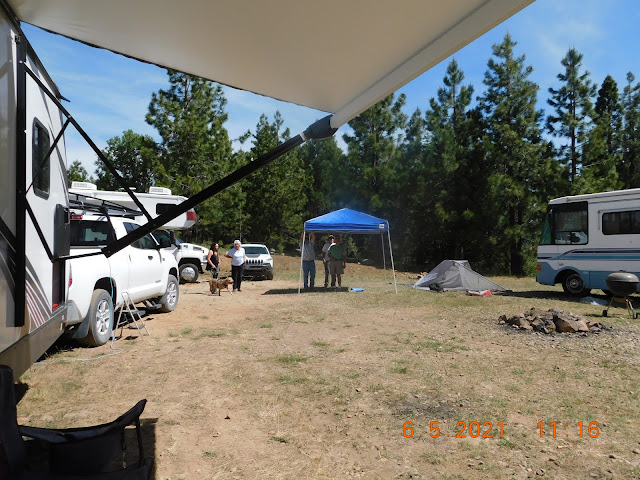 Steve's kids had borrowed a motorhome and arrived late afternoon. Rudy and Mary had been to our house when Rudy was around 7 or 8 Mary was about 4.  Now Rudy is 29! Now that was a catch up!!

A little later Eddie and Nancy pulled up behind us towing their lovely Arctic Fox Fifth wheel.  Another couple we haven't seen in years! Old home week for Ken, as a lot of people this weekend he worked with or for!

Eventually we all gathered around for some talking and a cowboy fire was started. We came inside about midnight!

Saturday morning came quickly.  The wedding was scheduled for 1100.  Steve started the barbecues and Ken volunteered to man them.  A turkey and two hams for the lunch after the wedding.

People started arriving and the party began.  Right about 1100 a ranger pulled in, Rudy talked with her a bit.  Apparently we weren't supposed to be camping there, but there were no NO CAMPING signs anywhere.  It all turned out ok..and we were allowed to stay. It's an old logging site in the National Forest!

Candy looked lovely in her dress and cowgirl boots! Her granddaughter was her maid of honor and what a beauty she was! Steve looked pretty impressive himself.

After the wedding the party started and about 1300 food was ready for some major lunch!

It was a nice wedding and we're glad to see Steve and Candy look so happy!

Thank goodness for the EZ UPS that provided shade, as it was a very warm weekend.

Eventually people started leaving and we were left with the camper group.  Again, a nice fire and conversation flowed!  Finally, I went to bed leaving most of them, up talking.

Sunday morning we were up bright and early.  Had our coffees and then went outside for more conversation with everyone that was awake.   Rudy and his fiancee Amanda left early has they had to get back to southern CA where they live.  Mary stayed behind and will fly out Tuesday morning to Wyoming where she lives.

After a few hours, we decided to make a community breakfast with Eddie and Nancy. I did the eggs and some muffins and Eddie cooked two pounds of bacon.  We all had  a nice plate along with jalapeños! YUMMY!

More visiting and then it was time to wrap it up and head out.  It was close to 1400 I believe.


Hugs and goodbyes with the promise of getting together again soon.  Fred and Rose split their time between homes in Arizona in the winter and Wyoming in the summer. Yes, we will be visiting!  Eddie and Nancy want to see Death Valley, so we'll do that with them too.

We headed up highway 50 toward Carson City and Washoe Lake State Park. Once we arrived we found the whole campground was FULL! On a Sunday..oh no what to do now?  Headed over to what they call Little Washoe Lake and found a dirt parking area and parked our home for the night.  It was really windy so we wouldn't have been outside anyway.  Ken plugged in the generator and we had tv for a few hours. Happy Hour had begun..LOL.

Monday morning we had our showers and then drove back to Washoe Lake SP and was able to find a few sites empty. Pulled into one and we were home.  WE decided to head for Betsy's for a late breakfast meal.  It was about 1030 or so when we headed out. 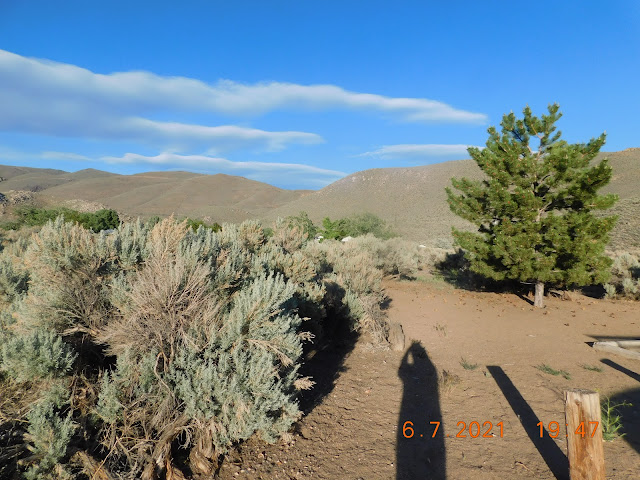 Our destination was  Meadowood Mall and JC Penneys.  They had hundreds of shoes on display but none my size.  Ok Macy's it is..nope, not my size! Uhh..now what? We walked the mall, going into any store that had shoes. Finally, we were on our way out and I was going to find a shoe store on my phone when H and M appeared.  Ken said let's give it try and YES finally found shoes! Why a 5 1/2 is so hard to find I have no idea!

On to Total Wine to pick up our online order and then back to camp. Found a place out of the wind and with some sunshine and enjoyed the beauty of that park. Later Ken barbecued some awesome pork chops for dinner.  Green beans and a baked potato it was a scrumptious meal!

Tuesday morning we were out of there and home by 1130 or so.  Unloaded the Mansion and it's ready to go again.  We won't be going for awhile though :( but she's ready when we are!

About 1300 Karen called and she had relatives in and wanted us to come over and meet them.  Ken had gone to town but when he got back we went over for a few hours.

Later we talked with Susan for a few minutes. We didn't realize she was home (in the motorhome) or we would have taken her with us next door.  Joe and Stacey got home from visiting his dad in the bay area a little later.

Leftovers for dinner, some tv and bedtime. Alot earlier than the weekend nights. LOL!

I was awake this morning near 0400 and texted with my sister for a bit. About 0430 started this blog until it was time to wake the hubby.

Today will be a day of getting ready to head to CA for Seth and Holly's wedding on Saturday. WE've decided to leave tomorrow with a stop in Joshua Tree, CA for the night.  Friday we'll head into San Diego hoping to beat some of the traffic, if that's even possible. The route we're taking will add over 100 miles to the trip but hopefully we'll avoid the LA area.

Have a wonderful day, I better get this one going!