A drive to Crystal Basin Recreation Area in CA...getting things done for camping! Joe's home to get ready for the move to Alaska!

Tuesday morning after breakfast we decided to take a drive to see where we'll be camping this next weekend. We had good directions that Steve gave Ken, but somehow the paper plate he wrote them on got thrown out.  Why my hubby doesn't use paper I'll never know LOL.

He had the basics in his head, but heck why not take a drive?  We headed towards Gardnerville and then Highway 88 to 89 to Highway 50.  A beautiful drive no matter what time of year.  About 140 miles one way...

At Riverton, Crystal Basin Recreation Area (this is the area where Grandson Adam is working) we made a right turn to go up the mountain.   We used to take our kids camping here all the time back in the 70's and 80's.  At approximately 6.7 miles, just past Peavine Ridge turn off we made a right.  Not quite 4 miles later we found a flat spot with more little roads, a quick right and there we see it!  We found the spot for camping and the wedding! 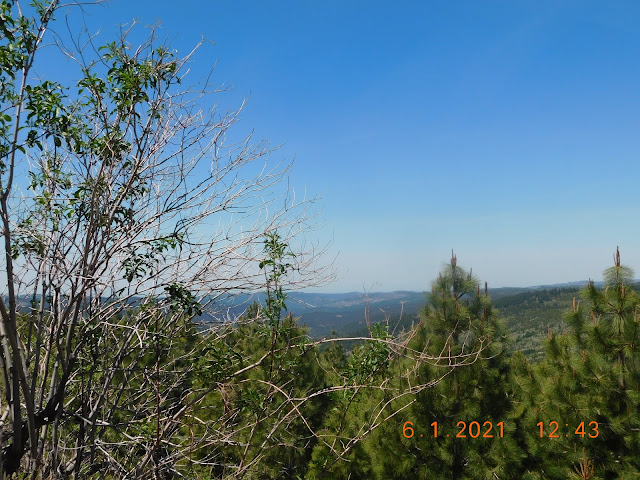 It's an old logging site, so pretty flat.  Plenty of space for RVS and people. Not a lot of trees around, but we do have an awning and ez up.  There is no cell service so we'll be out of touch from Friday afternoon until Sunday or Monday depending on how long we stay.  Wedding is Saturday. 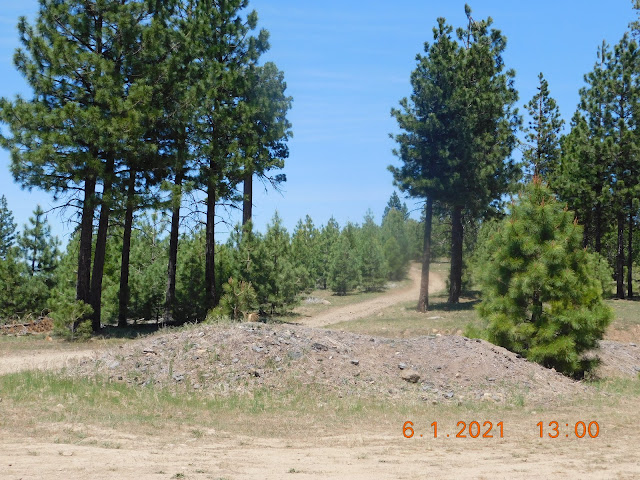 The approximate area of where we will be camping.. 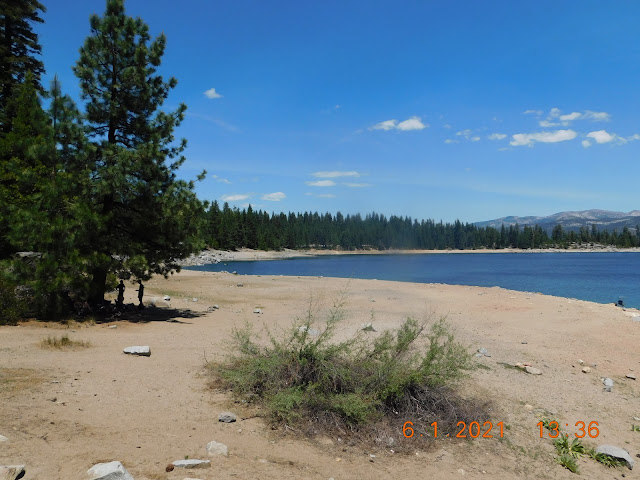 Once we were back on the main road we headed toward Ice House Campground where we used to camp way back then. It was just a few miles up the road and we turned right.

Small campsites, mainly for tents.  Of course these have been around over 50 years so it figures it would be tight! We won't be trying to camp here with the Mansion. There was still quite a few people even being a Tuesday.

Drove down to the lake, it was low but beautiful.  We had some good times there in the past swimming and fishing.

We left there and started the drive home.  We knew before we left home we'd be having linner in Minden.  We got there nearing 1530.

A delicious meal was had with me bringing half home. We're both glad we made the trek, so we're not going blind with the Mansion behind us.

Wednesday was spent at home. Ken got the Mansion to the driveway so it's easy to load.  Ken also helped Susan with her generator and got it going! Ran all day so she had air conditioning which was definitely needed!

I ordered new curtains for the green guest room so got those up. Nice for a change! For $40.00 the room looks different with the new spread and curtains :)

Today was Adam's sweetie, Erin's birthday! I heard from her the day before but texted her on her special day! 💖

Later in the afternoon I went to get my hair cut for the first time in 17 months. Ken and I have been doing it since this mess began. I took a pic of the cut I wanted and even though I think it's the cut, I came home looking like a poodle. haha. She loved how my hair was curly because it was shorter.

This morning (Thursday) I got some baking done early for Ken. Potato salad made for after the wedding and a few other things. At 1030 I turned the a/c on  as it was already 88 degrees and we know I don't like to sweat! LOL.

Ran to Raley's for a few things and then put a few things together to go in the Mansion in the am. The day flew!

Joe and Stacey came in to visit for a bit this afternoon.  He's here to get his family to Alaska and to visit his dad in the bay area before leaving.

Heading to Karen's house for Happy Hour! Hope to leave here about 0900 tomorrow for our camping weekend. Have a good one! See you Sunday or Monday!