We left Lake Mead Campground about 1130 last Monday.  Cathedral Gorge State Park was our destination.  Had a nice drive and pulled into the park to find EVERY site full! We've never seen it that way and a lot of the campers were out of state!

As we got to the exit we noticed to the left there were several more campers parked off to the side of the road. We headed there and this was overflow camping.  We were able to go around the circle and find a spot to park. Actually, a man from Washington (George) was outside his little Sunseeker and motioned us behind him to park. 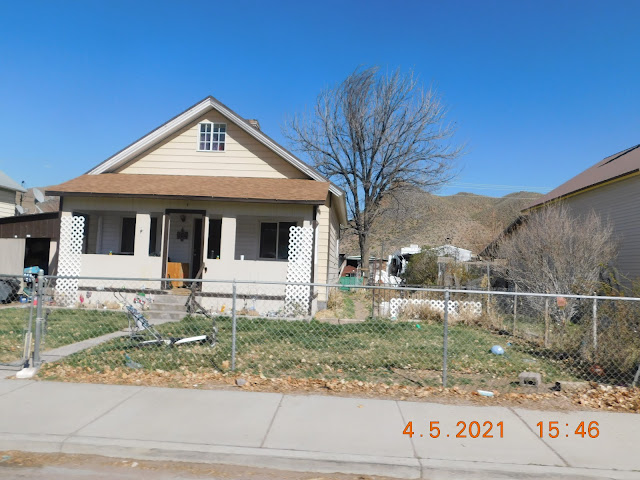 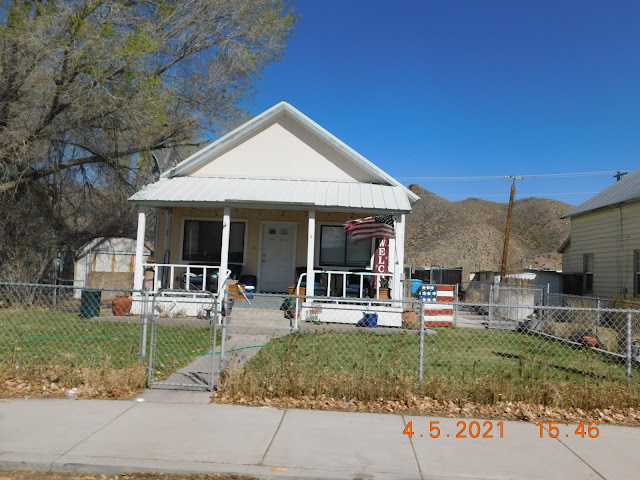 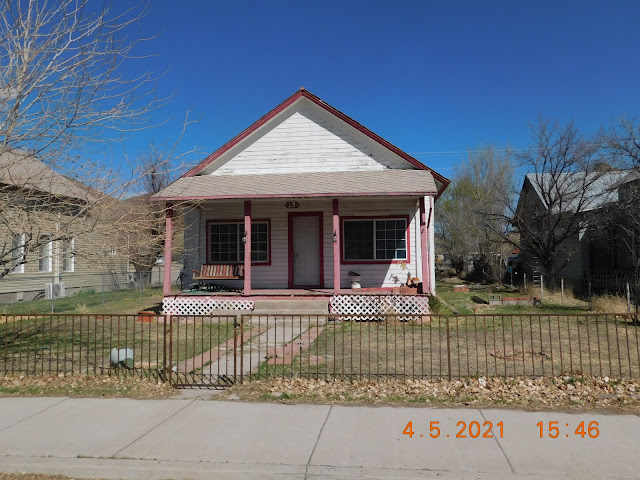 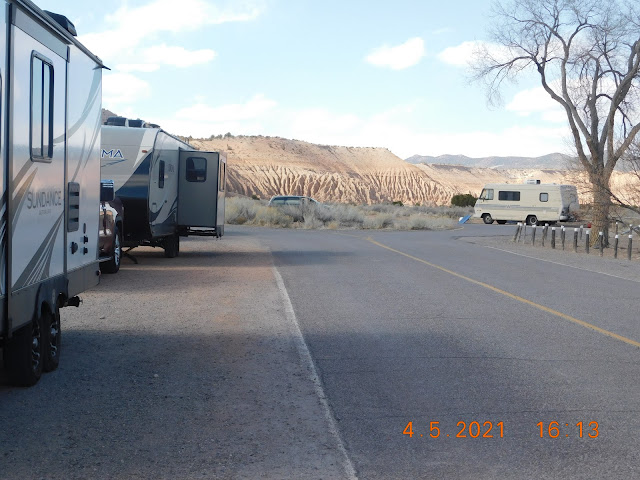 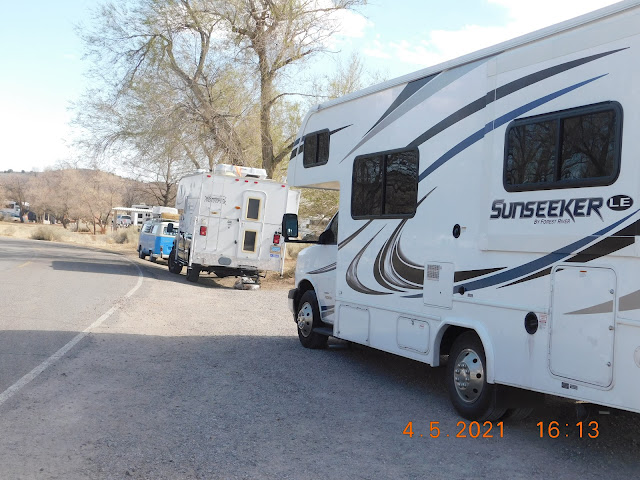 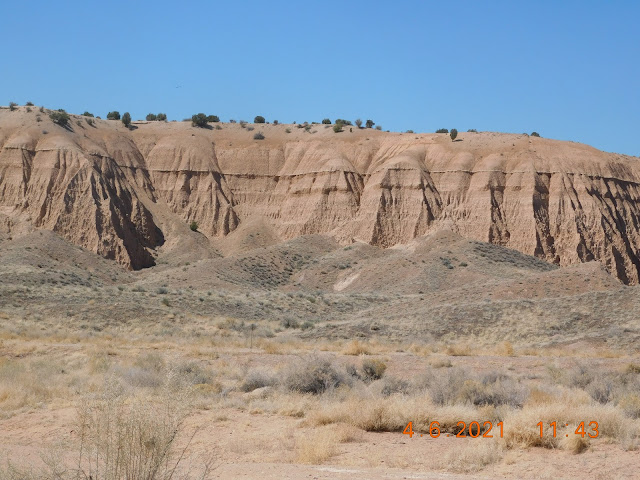 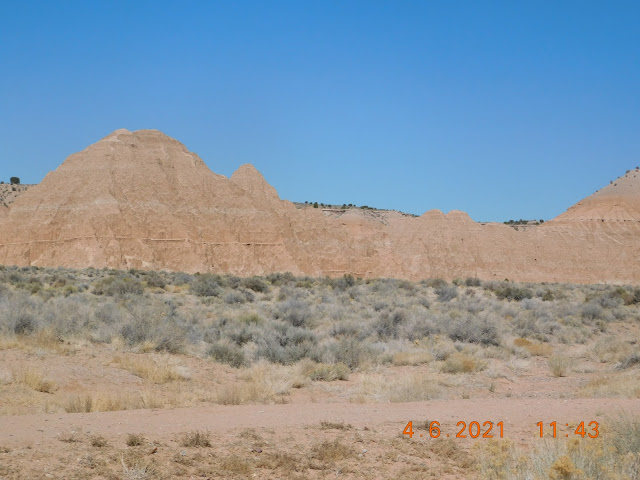 Because this is a state park in NV and Ken has the Senior Pass we pay nothing. Even the people who parked here had to pay $15.00 if you're a NV resident and $20.00 if you're not.

The wind was howling and temps were chilly so we just sat inside the Mansion and enjoyed people watching and Happy Hour. We certainly didn't have to worry about a/c there.

Ken spoke with George the next morning who told him that in Washington, if you don't have a reservation you're not getting a spot. Crazy. He said it's been like that all over except Oregon wasn't  too bad.

We left Tuesday morning heading for Cave Lake State Park just out of Ely, NV. One of our favorite state parks. Luckily it's seven miles off the road and there weren't many campers at all.  We found a spot, unhooked and set up chairs. Decided to take a walk up the hill where the other sites were. No one up there, but we decided to move to our very first site we ever had. We didn't check first because Ken was thinking the sites would be too small for us. NOT.  Several of the sites would accommodate larger rigs than us. *There is NO cell or wifi * 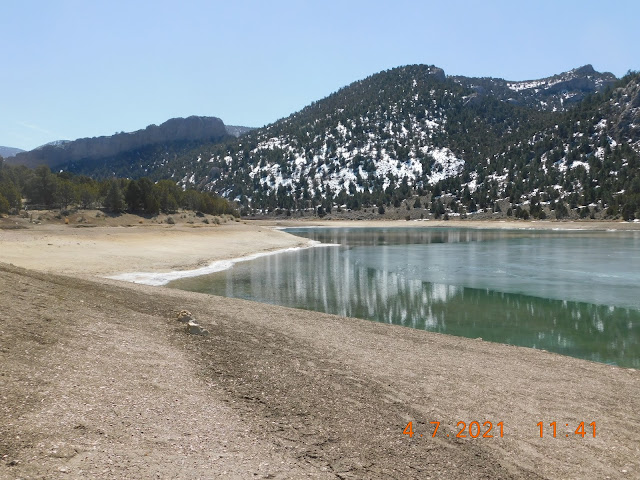 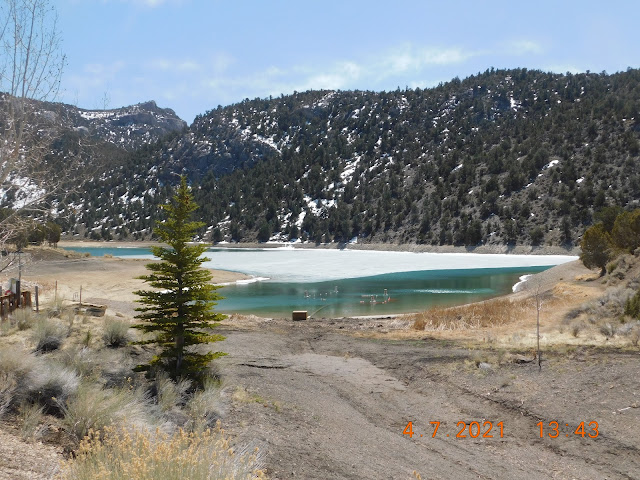 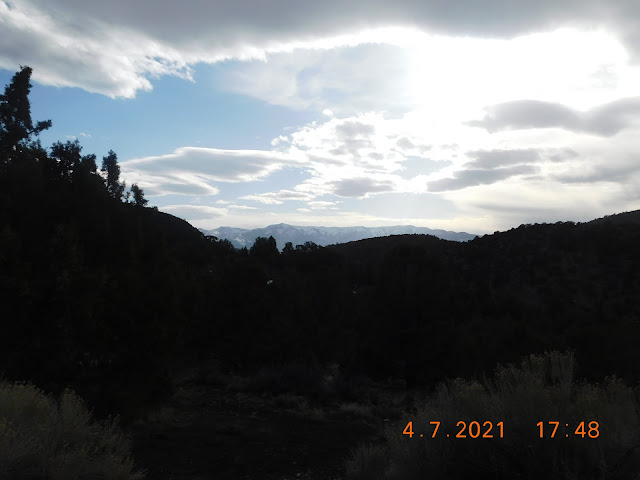 Adam had called leaving a message that he was going to stay at our house overnight. He'd been to Lone Pine for 2 days. He called earlier in the week when we had service saying he was going because he wanted to see Mt. Whitney. Good choice grandson! Too bad I wasn't able to talk with him as I'd taken most of the food with us, so hopefully he found something or brought it with him. :) 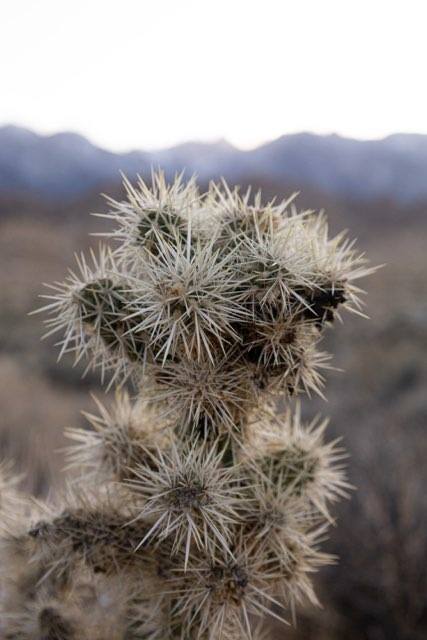 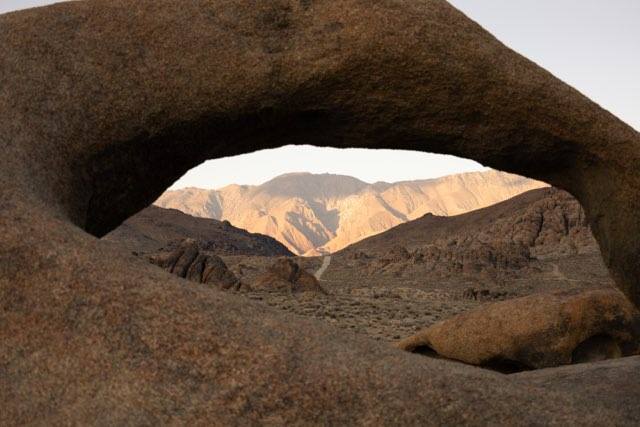 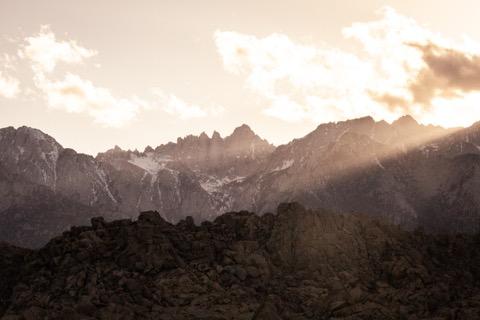 Ken barbecued chicken and we enjoyed the night. It is a beautiful park. The lake is really low and we're hoping it'll fill before summer.

Wednesday, we ran into Ridley's to pick up a few things. We planned it so we would have linner at our favorite Mexican place Margaritas inside the Prospector Casino. Yummy as always! I had veggie fajitas and Ken had a ground beef burrito with beans and rice on the side. OH MY.  I had enough left over for dinner the next day for the two of us. Great food and service!

Back to camp for Happy Hour and enjoying the rest of the day.

Thursday morning found us getting ready to head home. Our plan was to hook up and go back to Margaritas for their Senior breakfast of chicken fried steak and eggs. This will hold us all day!

We headed out and had a wonderful drive other than stopping to put air into one of the Mansion's tires. These are the cheapest tires ever that are on this rig. This will be the 2nd one we've replaced and the other two will be soon. We'll get it in on Tuesday when we have the Tundra serviced.

We turned into the driveway about 1600.  Always nice to be home and see that the homestead was just how we left it.

Put away some things and then we headed over to Karen's for Happy Hour to get caught up on the happenings in the neighborhood haha.

Friday I spent a couple of hours unloading and cleaning the Mansion so she's ready to go again when we are! Spring has sprung around here so we've got some spraying to do. Saw my first lizard yesterday! YUK!

Ken went with Karen to Gardnerville to pick up a pallet of fencing. Prices are going up and shortages will be had. After he got home he found things to keep and busy and so did I.  We met up later in the afternoon.

Decided to try and get this going Saturday morning. The days just go too quickly!

Well, Saturday didn't work out LOL.  We ran 21 gallons of weed spray through the sprayer, took a couple of hours but luckily the wind held off until right before we were done.

Ken dropped me at Raley's while he went to Tru Value and the gas station. Put away the groceries (not much as Walmart on Tuesday).

We were hoping to do some spraying at Karen's on Sunday so late in the afternoon we headed over to get her weed poison. She wasn't home but we took a couple of adult beverages and enjoyed her back fire pit area.  Ken got the fire pit ready for a fire and once she got home we'd have a fire with her.  We ended up leaving right before she got home.

Of course she called us and told us to come back over. Did we have sense enough to stay home? Of course not LOL.  Back we went until almost 2300 and we did have a nice fire haha.

Sunday morning we had set the alarm for 0600 and I was still sleeping when it went off.  Got ourselves ready and out the door for breakfast in town with Joe, Stacey and Rylee.  Joe just got back from Alaska last night and while he was there he found their house! Offer accepted, so they'll have a beautiful place to live once they're moved! We had a good couple of hours of visiting. Sure are going to miss them when they're gone! 😪😭

We were going to spray the weeds, but the wind says otherwise today...maybe tomorrow.

I did some baking this am, a lazy Sunday for me.  Ken got the tire off the Mansion and a bunch of other things done. We bought another Smart TV for our bedroom so he got that hooked up and going! I swear he's like the energizer bunny! 😀🐇

Well, it's 1500 hours...time to lock this up and get ready for Happy Hour haha. Have a great evening!