Monday was our middle son Eric's birthday he turned 46! How is that possible! We talked with him on the phone and he had the day off. Hopefully he enjoyed his time.

Tuesday I had a very nice drive along I 80 except for one section near Drum Forebay that they were working and had a CHP escort.  Took about 40 minutes to get through that mess.

I arrived at Russell's just about 1400 which is what I was hoping for. I went inside and didn't see Aaron.  Russell said he should be there, finally found him sleeping in his bed all covered from head to toe. The boy was tired LOL.

Nearing 1600 I headed for Lincoln High School with Aaron driving. He's good, a little fast for my liking. That's how you learn with your permit.

He got out and headed for the gym.  With Covid rules in place spectators can't go in until time for the game.  A few minutes later Russell showed up from work, we talked a bit and went in for the game. There aren't many places I'll wear a mask, but to see my grandson play I put it on such as it is.  I ordered it from Amazon, no protection just mesh and glitter. It works to get you past the mask police.

It was a great game with Aaron scoring 16 points! They only lost by 1 point with at one point they were up 13. You just never know!

After that it was dinner time so we headed to Old Town Pizza in Roseville.  Had a very nice time and awesome pizza and salad.  Only thing missing was Lori as she was doing some last minute things getting ready for their trip on Wednesday.

Once we got back to Russell's Lori and Allissa were both there so we ended up talking until 2330. Russell and Lori were leaving here at 0615.

Wednesday morning I got up in time to say goodbye and off they went.

Aaron had no "real" school because of testing but got him up to Zoom.  He had an egg sandwich and back to school for a bit.

I took the time and ran to Raley's for a few things and a quick stop at Dollar Tree.

The rest of the day was spent here at home just working on a few things. Evening was quiet and we had tacos for dinner.

It was our grandson Adam's 22nd birthday.  He and Erin were at dinner in Auburn so afterwards they drove down to say hi for about 15 minutes.

A few days ago Adam got his official job offer for the National Forest Service. He starts in Pollock Pines May 10th.  He is one happy camper. This was his goal as now he can go anywhere in the US where there is an open position once probation is over. Always glad to see a grandchild's dreams come true!

Just as I was getting ready for bed, Aaron said good night and I asked if he wanted some ice cream. Guess you know the answer to that. Ice cream, whipped cream and chocolate sauce. YUM!

Thursday morning I se the alarm for 0500. I didn't need to as I was awake tossing and turning about 0200.  Why? who knows.  I got up and got ready and then at 0600 I woke Aaron as he had breakfast with the football team and coach at Waffle Barn set for 0700.

He got dropped off and I went to the parking lot next door and had my breakfast burrito I made at home. Then I called Ken to check in and see how he was doing. About an hour later Aaron texted and we came home.

After a bit I ran to Ross and to Penney's to check out some clothes for the wedding. I needn't have bothered as I didn't find a thing. Why they make these dresses so overbearing and just too much. Just something simple can't be found. Ross's dressing rooms are still closed but Penney's is open. So there's still time.

It was such a nice afternoon I went to the back patio with my kindle and actually fell asleep in the sun for a bit. Guess 0200 is catching up with me. 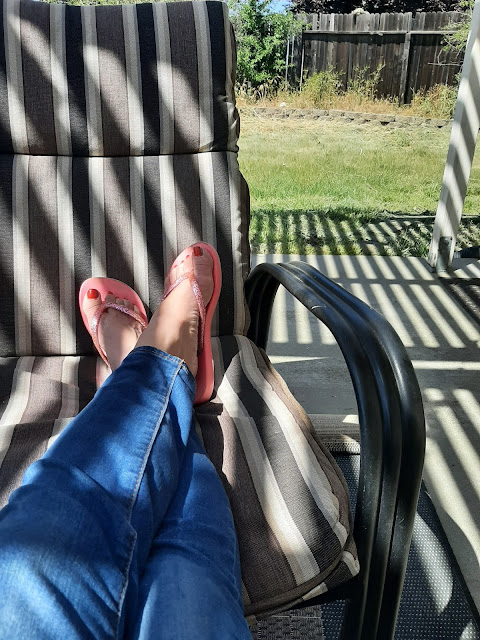 Burgers and fries for dinner tonight.

Ken's keeping busy at home with getting things done on the Mansion.  He's got other projects to keep him occupied too.

It looks like Russell and Lori are having a great time in Texas meeting up with old friends from the Marine Corps.  Enjoying watching what they're doing on Facebook!

Tomorrow is a "regular" school day for Aaron. Then the weekend already.  Saturday is a game so we'll head up there along with my sister Wendy and our friend, Diane. They actually had 4 tickets for this game so more people are allowed in.  Must be a bigger gym. It's in Granite Bay, a very nice zip code. haha.

I hope  to get this posted before we have to leave for practice.