Snow! New hardware in the MH. Hoping weather cooperates so we can head to CA this weekend!

Good Thursday morning! Waking up to a snow covered day.  We have warmer temps so don't think it'll last long (34 feels like 27) as we have a slight wind out there. 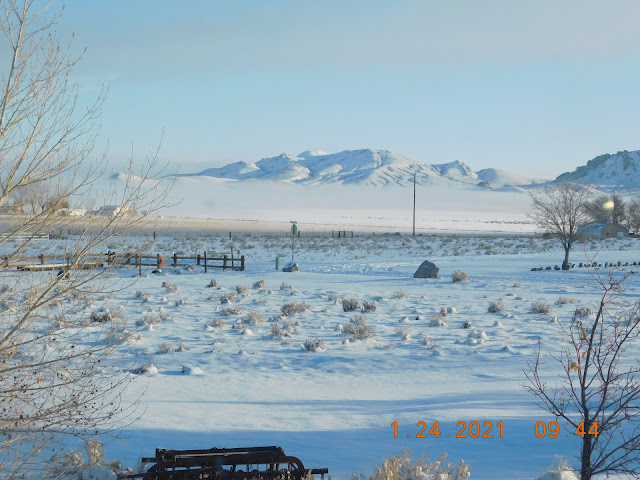 So pretty from the inside looking out... 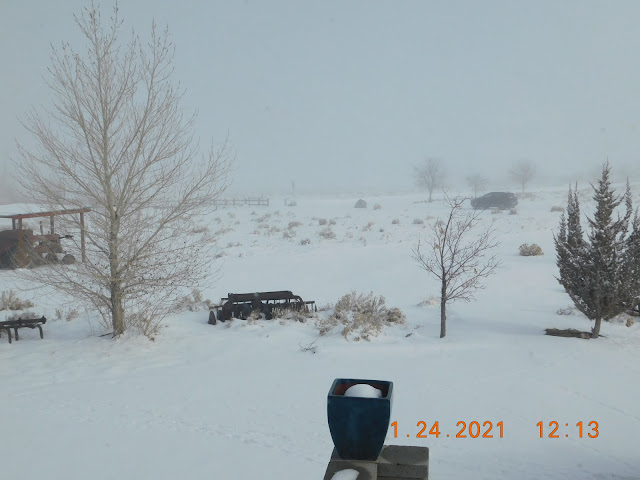 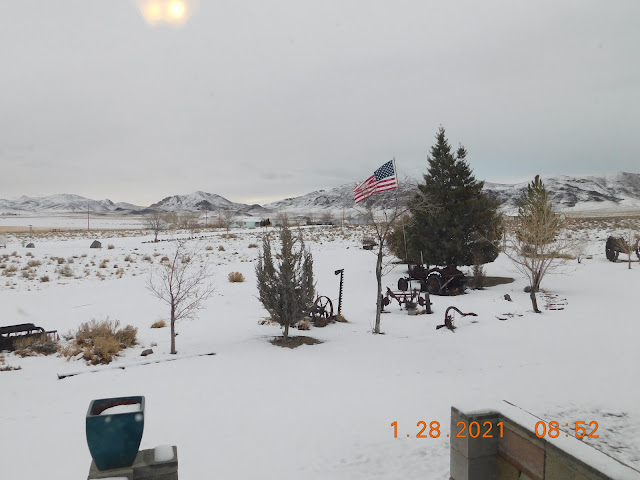 Got a little overnight...

Adam and Erin didn't get here until almost 2030 on Monday evening.  They left Bend, OR about 1000 and headed towards Winnemucca, NV.  He hadn't been to eastern OR so they decided to take that drive as it was only about an hour longer or so. Of course the weather decided to play a part in that as it was snowing quite a bit. Accident on I80 also slowed them down.

Once they arrived we sat down to a late dinner of enchiladas and coleslaw.  We visited a bit and by 2230 we were all in bed. Long day for them.

Ken did get the new hardware up and it looks so good. I didn't get out there that day. 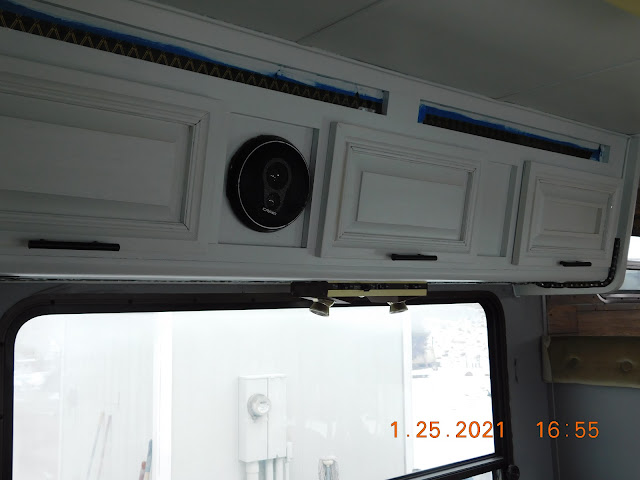 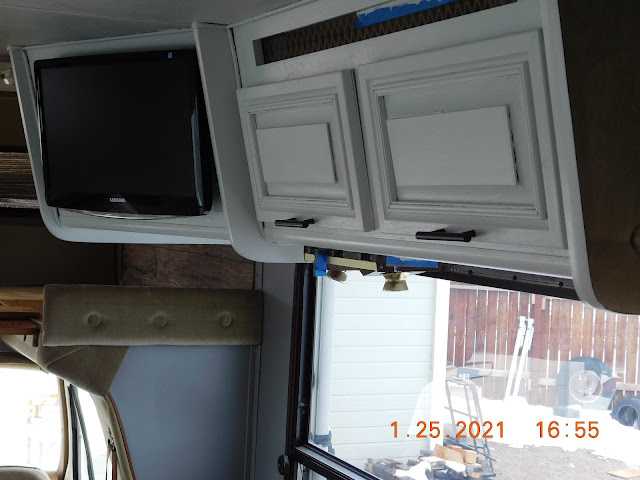 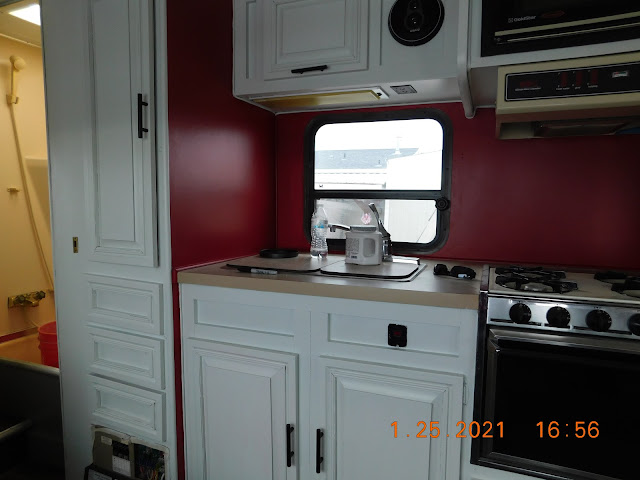 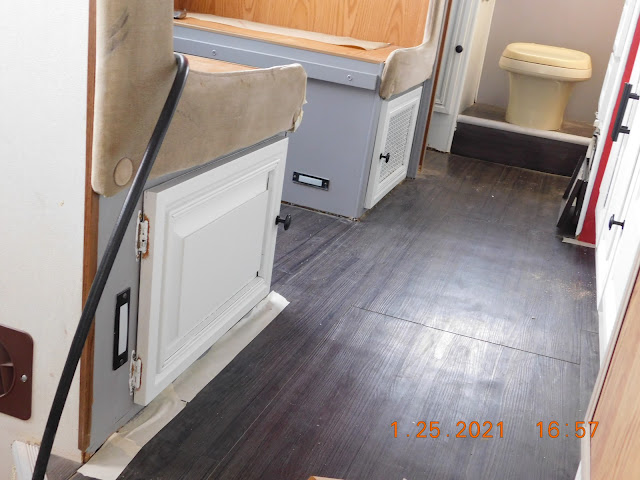 Touch up needed..because I'm almost out of white paint (and I'm cheap LOL) decided to paint the dinette cabinets grey. works as a nice contrast and nobody really notices anyway.. 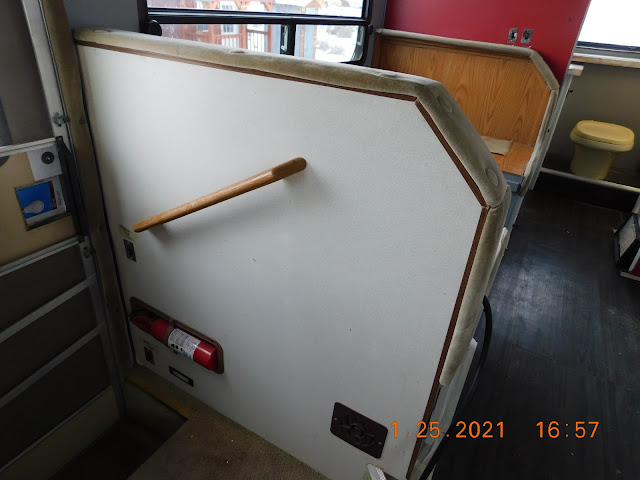 As of now this is all that needs painting..but it'll have to wait a bit.. 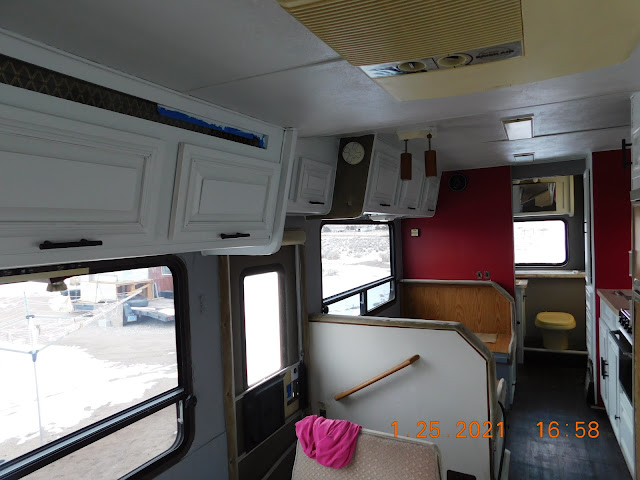 Tuesday morning the kids were up and breakfast was made.  We visited some more and nearing 1100 they were ready to head out.  They were staying 2 nights, but with the winter storm that was expected they made the smart decision to leave. 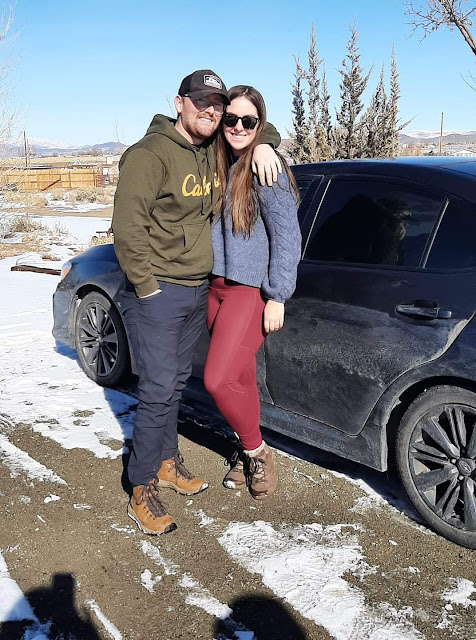 Just about an hour after they left I was headed to the MH and saw a big bag in their room. UHOH..Erin had left her clothes bag!  I called her and they turned around. No MH that day either haha. They were just out of Gardnerville.  I met them at the park in Wellington.  She kept apologizing and I kept telling her no big deal :) Accidents happen just glad they weren't any further out!

Later in the afternoon we got a picture of a fire pit and four chairs on the back porch of John and Karen's so we headed over for happy hour. It was really nice out there as their house and cover hid the wind. They have a bigger propane fire pit than us so we were nice and toasty. Came home to leftovers for dinner.

Wednesday, after our regular morning of blogs and coffee the day got started. I was determined to finish the MH painting..should have left it!  It was a cold and windy day. We started MR Heater, but it was still cool in there. Even though the paint was warm from being in the house, it just didn't go on as smooth as it should. Got the cabinet between the chairs painted but then I stopped.  I only have the little entryway area to paint now, but it'll wait. 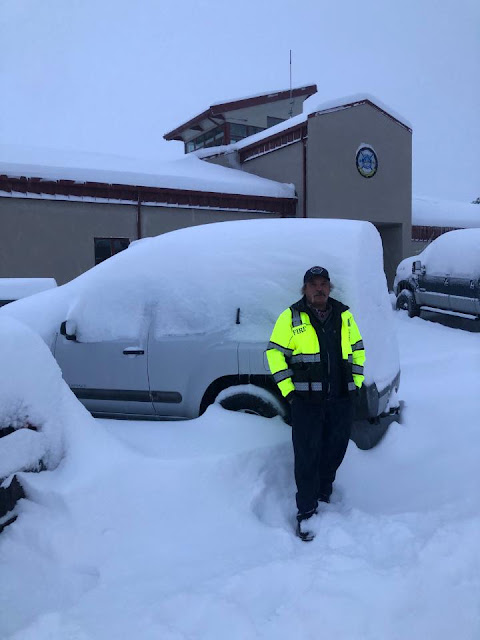 Our neighbor Joe at the work. He works for the fire department at the Marine Corps Mountain Warfare Training Center (MCMWTC) out of Bridgeport, CA. 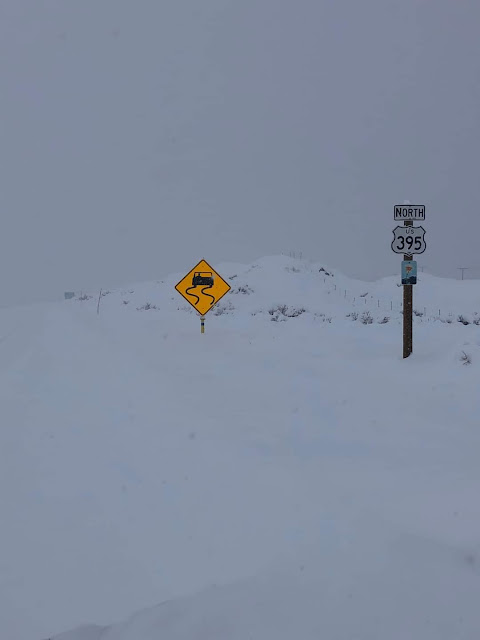 Highway 395 (one of our favorite drives)..was closed yesterday between Bishop CA and the Nevada State Line...guess it's understandable 😅😆

We're hoping to get over the hill tomorrow or early Saturday morning. Russell is hoping Ken can help him with taking out a wall this weekend. We've learned (the hard way) that if chains are required it's not worth the trip.  The back up is ridiculous and it takes hours to get through the checkpoint  area, even though we have 4 wheel drive.

Keeping our fingers crossed and eyes on the weather.

Below are pictures so far of Russell and Lori's remodel project. Their home looks so different already, but they've got more to go :) Can't wait to see it finished! 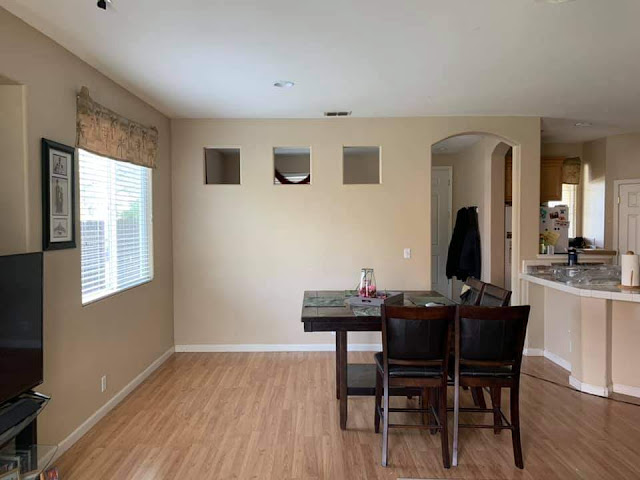 This is how the kitchen and dining area looks.. 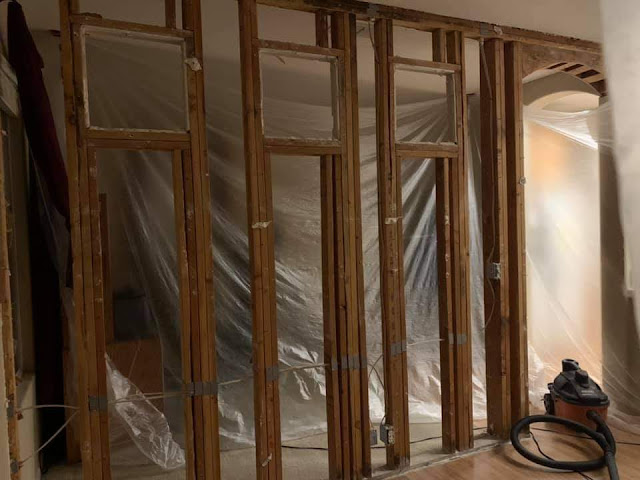 Russell got this done last weekend. This weekend's project is to remove the wall and electricity to make one big "great room"... 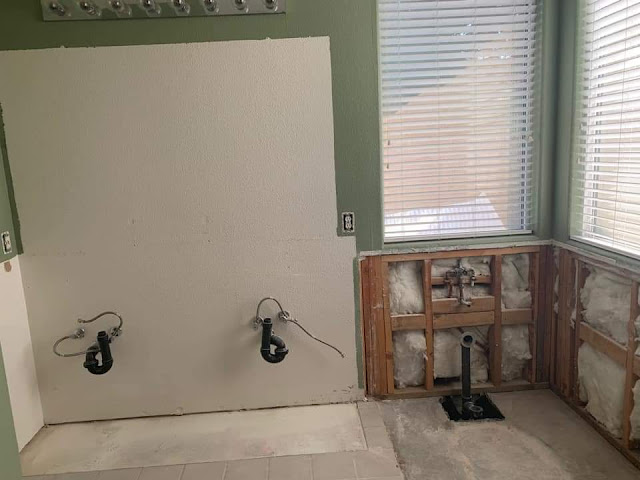 This was their bathroom before... 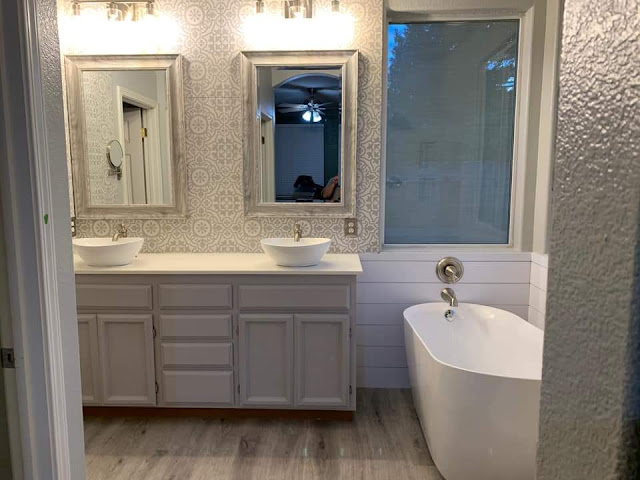 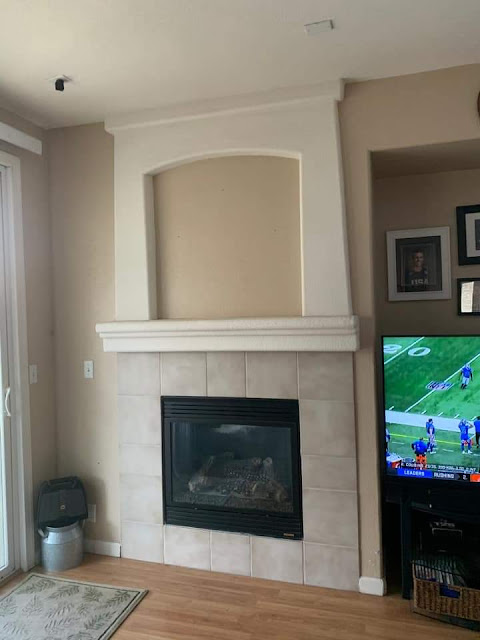 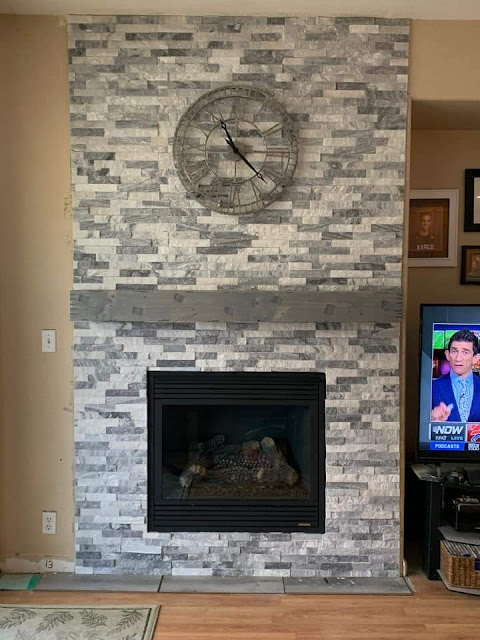 Hallway bathroom...First picture is before...the rest are after 💙
Time to get the day started! Have a great one!