Cold temps, working on the Motor Home, lazy afternoons and 11 years ago we retired!

Saturday morning was spent just doing household things as it was way too cold to be in the motorhome. Temps were in the high 30's at lunch time. Uggs, sweatshirt and a jacket I headed out to the motorhome after lunch. I was determined to get something done. It was really cold but after working a bit in the motorhome it seemed warmer inside.  I started in the upper bunk over the driving area as I knew that would be the toughest area to do.  When I am ready to paint a lot of it will be laying on my back.  I got the curtain rods down and started the spackle. 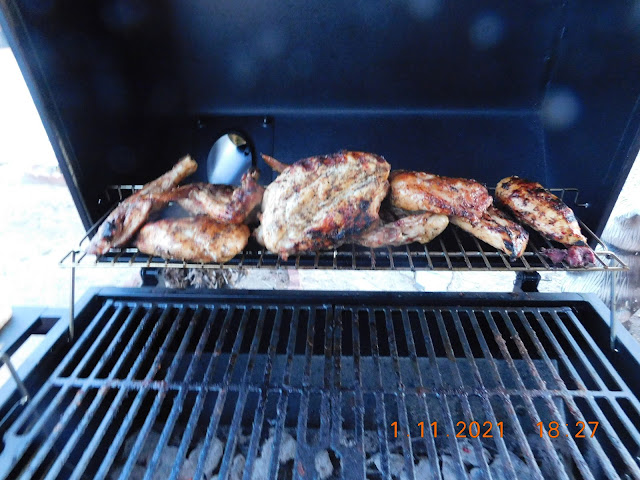 Last night's chicken on the new barbecue...oh so yummy!

Sunday was a another repeat of Saturday.  Later in the morning I headed out. There is a covering that looks like wallpaper.  All the sites I've researched say not to pull it off as it's really a protectant rather than wall paper.  On the passenger side of the bed it was really bad with wrinkling and pulling away.  I had no choice but to pull it off...oh boy! You can see water damage in the wood. 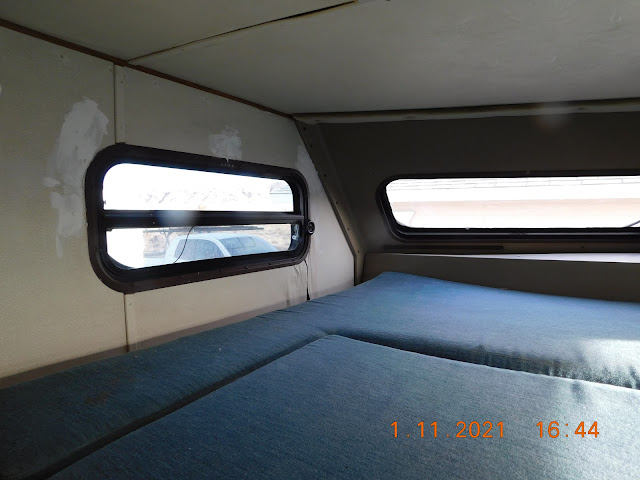 Got some sparkling done..I told hubby to leave this side alone! 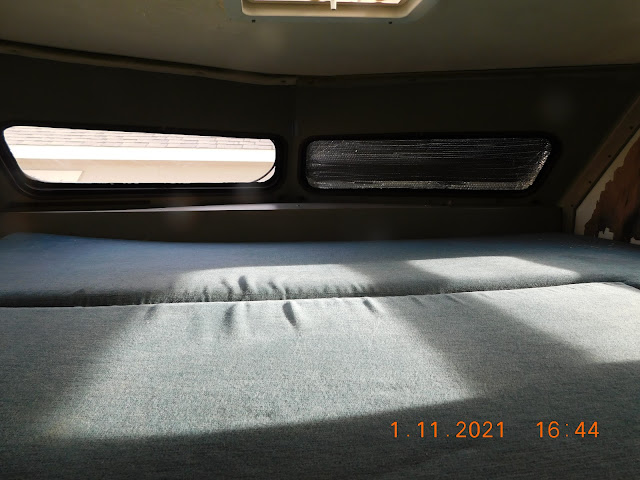 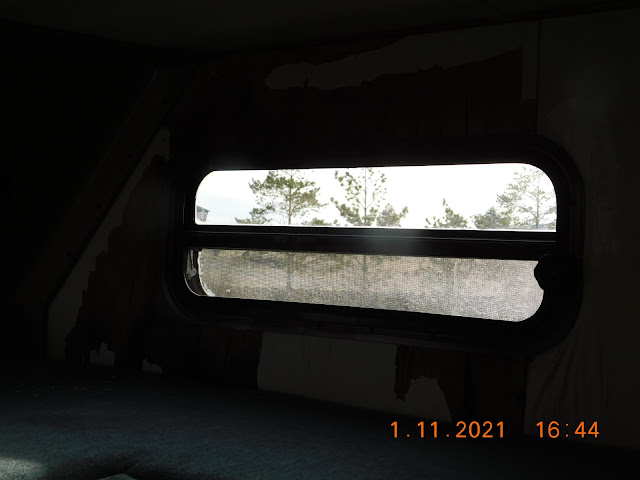 Kind of a dark picture but the brown color is the bad..Ken's project..😱

I called Ken in and he's going to take the window out and do whatever needs to be done. Since that is his project now...I'll start in the bathroom.  He took the doors and valance off in there and 3 doors off the kitchen.

By the time he got that done it was lunchtime.  I was cold, even my feet were cold through my Uggs..that never happens. We both decided it was too cold to go back out. He plans on setting up a Mr. Heater out there so that will help and temps this next week are looking better.

Monday morning we awoke to temps of 17 degrees. Got some chores done inside and headed outside noon or so.  There's a really big medicine cabinet in the MH bathroom, so that was my chore today.  Took the sander and got rid of the rust that's there. Got it painted and it looks a lot fresher.  Yay! Did some more sparkling in the rest of the MH. 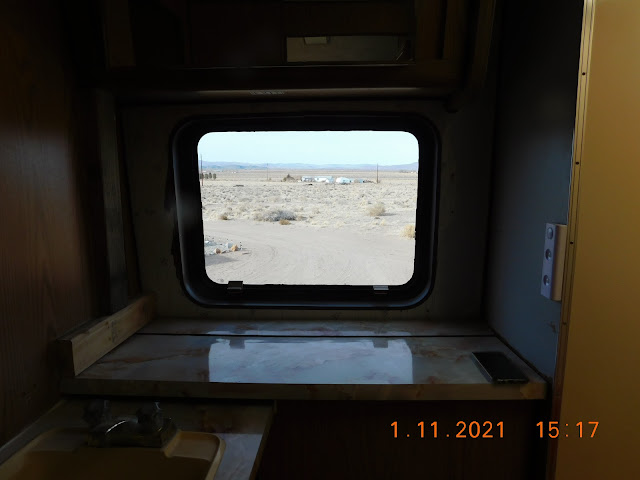 Valance and shades have been removed. 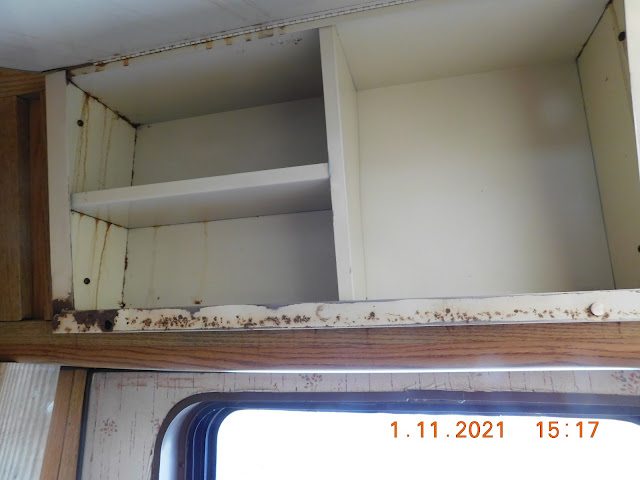 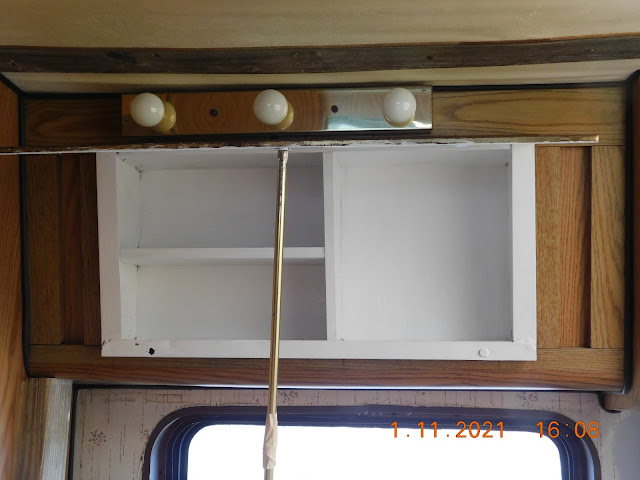 Much better now..touch up today...

About 1530 Ken started the barbecue, so that ended my work day LOL. Tradition is that I sit with him while he barbecues so that's what I did. :) He set up the Little Red Campfire so we were warmer out there.  Temps never did get past 43.  Ken had a fire going in the wood stove all day so it was nice and toasty in the house. 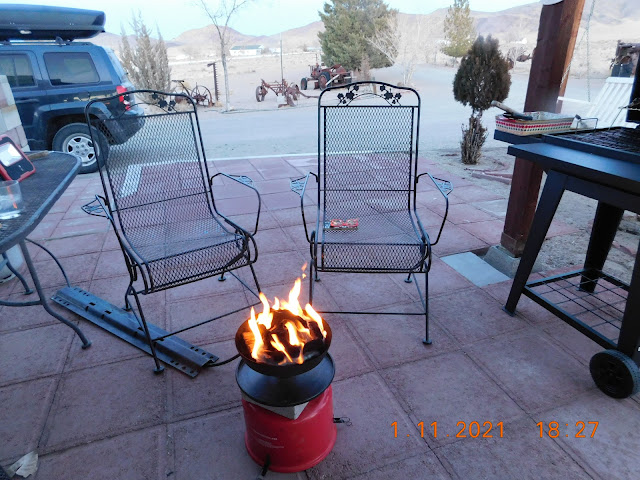 This morning (Tuesday) finds us waking to cloudy skies which usually means warmer temps..(28 heading for 56) yes! We'll see what mischief we can get into today.  Hoping to paint a bit in the MH bathroom once it warms up.

The other night we watched a movie on Prime Video called THE RIDE made in 1997. Oh wow! One of the best movies I've seen in a long time. If you need a good cry, this is the movie to watch! Actually filmed on a ranch in Mesa, AZ.

January 10th was 11 years since we both retired from Sacramento County! It's been a wonderful 11 years, looking forward to the next 11 and more!

Time to get this wonderful Tuesday started! Have a great day!