Saturday morning we got up early and headed for the Washoe Lake area to pick up a load of firewood that Ken ordered.  The property is  set against the beautiful mountains in that area.  What a zip code!  Beautiful homes and ranches all the way back.


Really nice wood and definitely a full cord.  Sammy and his brother Jose loaded the trailer and after some nice conversation we said our good byes.  Certain we'll be using Sammy again for wood. 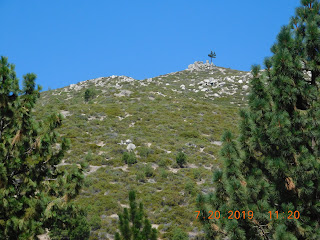 We headed to Walmart in Carson City for a few things and then we headed home. We were going to be having a really late lunch if we went all the way, so Ken suggested a Chinese Place called Chopstix.  We ate there one time quite a while ago and it was ok.  I remember we said we'd go back if ever we wanted to.  Well, we won't go back.  The hot and sour soup was very bland and neither of us were impressed with the entrees.  Oh well.

We got home, unloaded everything and then a little later we headed over to John and Karen's for little Sophia's 4th birthday.  Her grandpa John got her a battery operated UTV and that was definitely the hit of the party with the few kids that were there. Karen bar b qued some awesome burgers and there was tons of food! We visited out under the misters on their deck and a great time was had by all. 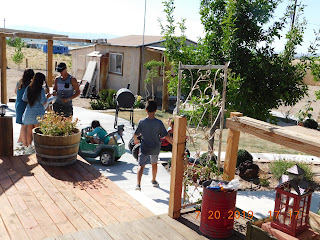 Sunday morning we were talking about what to do.  It was supposed to be a 100 degree day so we knew thee wouldn't be much getting done outside with the heat! We decided to take the car and some lunch and head for Bridgeport and the campgrounds back there just to see how it looks on a Sunday.  Bridgeport is only 74 miles or so from here and then add another 9 to the campgrounds.

Mason and Eric jumping in at Loon Lake

Had a lovely drive and extra nice in the air conditioning.  We got to the campgrounds and the temps were in the low 80's.  Took a drive to the end of the road where there is a full service campground (we don't stay there).  Watched the people and then went inside the boat rental place to get an idea of what they charge.  Not bad! 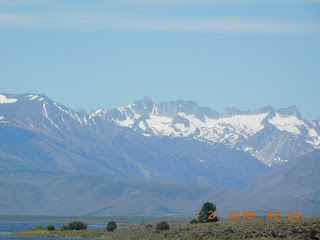 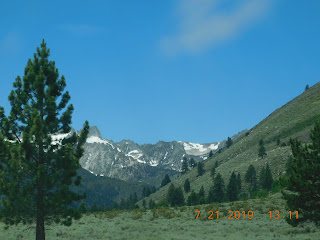 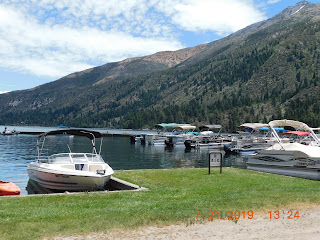 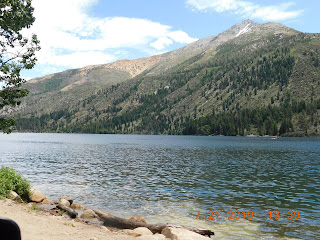 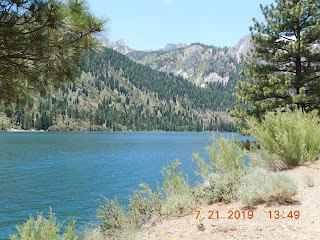 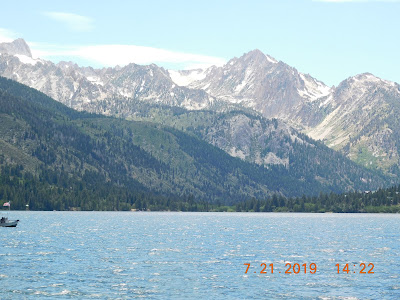 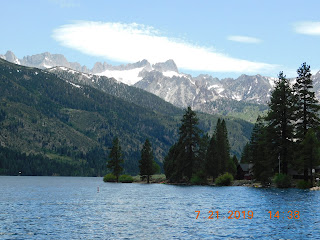 We then headed down the lake and it was time for lunch and because it was special, beer and a glass of wine!  We had met Joe, Stacey, Rylee and Susan for breakfast so not much lunch was really needed.  We had crackers, cheese and some deli ham while enjoying the view! It's so gorgeous back there.


Then we moved on down the lake and visited a few spots.  Decided to be lakeside for another glass of wine and a beer.  We talked about when we could come back and hopefully the grandkids can join us. :)

Then it was time to head back home and see what was going on.  HEAT!  Inside relaxing.  Thunder and lightning started up so outside we went. It was still hot but enjoyed watching the show. Eventually it was time for dinner and Ken wanted quesadillas again.  Ok, that's easy.  Eventually, bedtime. 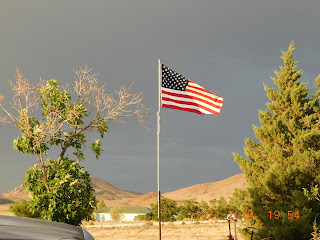 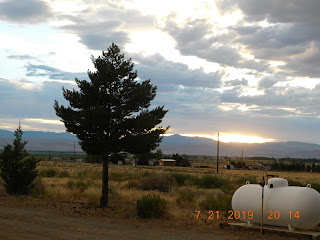 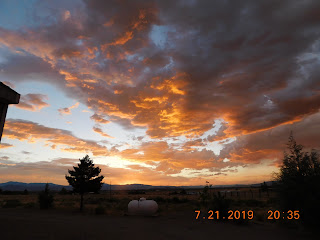 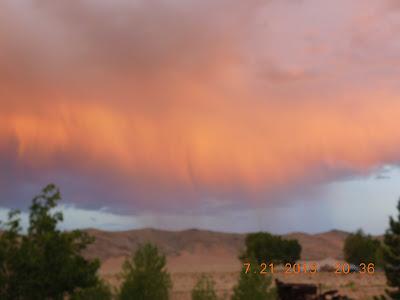 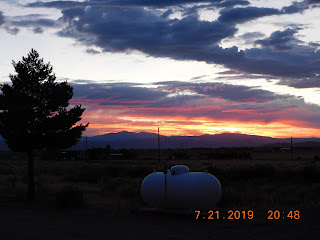 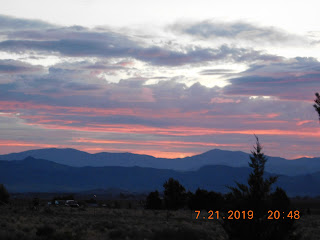 We slept in the guest room for that welcome air conditioning so this morning it was 0600 before I plugged in the coffee.  Did some checking in with our blogging friends and got the day started.  Going to be another hot one, so anything that needs doing outside better be early.  Ken watered all the plants that aren't on a drip system and started the trees going on drip.  Most of my stuff was inside.  About 1100 we took the quad and trailer next door to give Karen the chairs that went with our old table we gave her.  Visited a bit with them and saw the decking work John got done yesterday.  Unfortunately they'll be hiring someone to finish the project as he got called for a job in CA.  He wanted it but wanted a few more days.  The way of the working people.   We'll probably head over for happy hour a little later.

I've been pretty lucky to hear from the wandering grandson (Adam).  He spent two nights at Mt. Rainier, Washington. He was only about 2 hours from the border of Canada so he decided to go.  He said he'd be mad at himself if he was that close and didn't do it.  Had a very easy border crossing going into Canada.  He said the border agent was very nice.  He drove about an hour to a provincial park and the campgrounds were totally full!  He stayed at the park and took pictures then headed back to the border.  I guess US didn't approve of such a short visit to Canada so they searched his car.  They said he didn't have enough camping equipment!  He's a 20 year old!  What do they expect?!  He had food, tent, sleeping bag and some clothes.  Anyway he wasn't happy w the US Border girl!  haha.  He drove towards Mt. Rainier for the night.  He's headed home now, but was in Bend, OR last night where he met up with Lexi who he's spending the day with today.  They're supposed to go climbing (lord knows what) and then paddle boarding.  Hoping he's having a good day!  He plans on being home tomorrow, which will give him a day before he goes back to work on Thursday.  Not sure when college starts but he's already committed to our camping trip. A special THANK YOU to all who responded on FB regarding my question about $$$$..

Seth, Mason and Jacob have already said they want to go too. :) Haven't heard from Aaron, but basketball may get in his way..we will see :) We're looking forward to the 4th of August to start a few days at Bridgeport camping with whatever boys we get! :)   Decided to rent a pontoon boat for one of the days so they boys can enjoy fishing the lake :)

Below: Eric and Seth jumping in the deep water...

It's 97 degrees so we're just chillin with the air-conditioning.  Looks like there may be some more thunderstorms later, as clouds are rolling in.