A couple of months ago while talking with Karen she asked about our anniversary and what year we would be celebrating. I told her we were coming upon 50.   She immediately reacted and said "We're throwing you a party!" That's the kind of people they are!  We decided on September 3rd so our kids and others who work for a living could probably make it, as it's Labor Day weekend.  Our anniversary isn't until the 16th, but this date worked the best! She told us to invite as many people as we wanted, and we were not contributing a thing!

She worked with our boys to have them bring pictures, unbeknownst to us. 💗 Of course, no one takes real pictures anymore so most of the pictures are older which it's nice to see when we were young. LOL!

The last couple of weeks we've been getting ready for the party and taking care of household issues that you only do when you have company coming! Haha.

Friday the 2nd we had our son Eric, Christina and Mason show up.  Our friends Doug and Michelle (from Kingman, AZ) came too.  Bryan and Cheryl were coming that day but decided because of the heat of the day for their dogs they turned around and went back home to Lincoln, CA. Ken's sister and our nephew Jesse came in too. 💙

We all enjoyed visiting and then we had a taco bar and 7 layer dip later for dinner.  Karen came and visited for a bit then took home a couple of tacos for dinner. Luckily we had places to sleep for all of them. Doug and Michelle brought their new to them motor home, Eric and Chris in the Mansion over at John and Karen's RV Park LOL. They have 4 RV spots with water and electrical (30/50 amp).  We had the motor home and Mansion over there along with Doug and Michelle.  💖 Diane and Jesse were in the 5th wheel here.

We were all up a lot later than we needed to be, but hey! Once in a lifetime right?!

Saturday morning I was up early and got breakfast going in the outdoor kitchen. Temps were perfect for a 1/2 hour or so, but this had to be the hottest weekend of the year! Bacon, biscuits and gravy and eggs and way too many flies! Enjoyed by all.

A little later in the day KC, Sierra and Rylee arrived along with Russell, Lori, Allisa and Bryan. Cheryl stayed back because of their dogs. Aaron and Kayla showed up a little later and we had them in the motor home at the RV Park.

At 1400 we all headed next door to the surprise that awaited us. WOW! I started tearing up as soon as I saw it all! Sunflowers, covered tables, gold plates, fabric covered chairs. The decorations were incredible! It looked like a wedding. Ken even told Karen that maybe we should have recited our vows! LOL. She said "I told you so!" 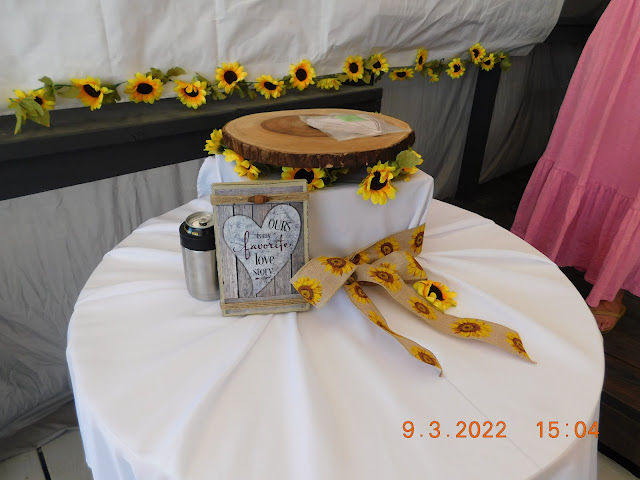 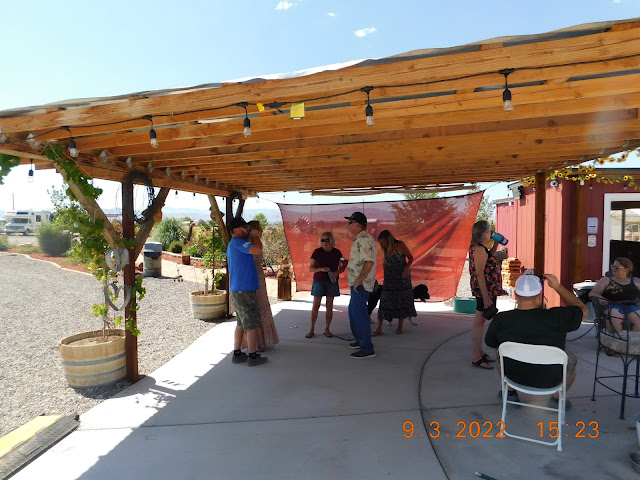 Karen made up bags of bologna sandwiches and barbecued potato chips to copy our wedding night dinner 😃 Then came an amazing dinner of pork roast, tri tip, salads and an incredible cake, that we never had when we got married.

Our friends Randi, Joel and Keith showed up later. Ken found me and said you better come out here. In the back of Aaron's truck was a beautiful Pit Boss smoker/cooker! We said "No gifts" but apparently alot of people don't listen LOL.  4 families went together and bought us this amazing gift! Thank you Aaron and Kayla, Joel and Randi, KC and Sierra (Rylee too) and Paul, Gurmeena and kids!

Adam was able to get Sunday off so he showed up about 1900. Karen's hubby John was able to be there around 1800 after working in CA.

Karen's whole family was there too to help us celebrate and also they had helped decorate on Friday along with some of the cooking! The Boys Next Door played awesome music from 1700 until almost 2130.

An amazing night of dancing, friendship food and love!

Sunday morning after a very late night I was up early.  Wanted to cook breakfast in the outdoor kitchen as some people were leaving Sunday morning to head back to CA.

KC and Sierra basically cooked breakfast.  Much appreciated!! 💙 We had breakfast sandwiches and mimosas or bloody marys for whoever wanted them.

We said our goodbyes to those who had to leave.  So thankful they came to our celebration as we know they have very busy lives!

Hot and miserable day. Christina, Allissa and Lori enjoyed some time in the stock tank before they had to leave in the afernoon!

Monday morning we said goodbye to Doug and Michelle as they were headed to San Diego so she could see her son who's working in the states this week.

Steve and Candy got themselves ready and left a little later.

Adam left about 1100 this morning as he's working tomorrow.

Been a wonderful long weekend! So incredibly blessed to have these family and friends (who are like family) celebrate our 50th! 💙💕💖💖

Headed next door for Happy Hour with Karen so will post this quickly. Next post will be a picture overload so beware! xoxxo

Have a great night!!