Friday morning we headed for Carson City and a visit to the lab for Ken at Carson Valley Hospital. I waited in the car and enjoyed my book :) He was in there just about an hour and from there we headed to Walmart. I swear if we didn't eat we'd have so much more money!  LOL!

Once we were done there we headed back towards home. Nearing 1330 or so we decided to have Linner at Dini's in town.  We don't go for lunch there much but it was so good! We both brought home leftovers. 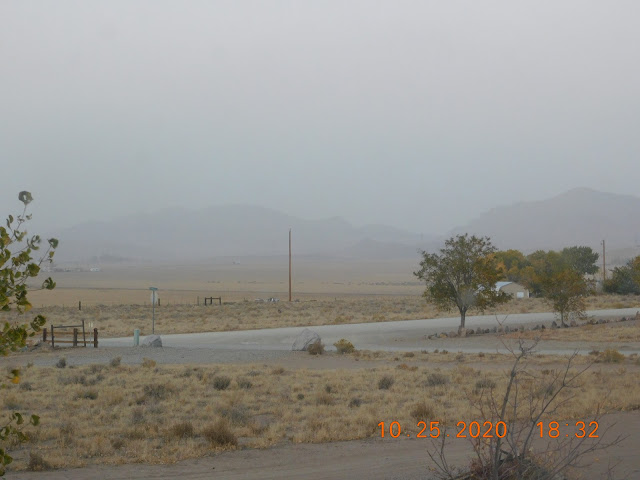 Yesterday's wind brought in all kinds of dust by evening.

We went over to Happy Hour at Karen's place. She's got family visiting so we always enjoy spending time with them.

Saturday was a stay home day other than a quick run to Raley's.  Cleaned out a closet and found some winter clothes..just that kind of stuff.

Got a couple of things ordered for Christmas as I think the longer we wait the longer the wait will be since that'll probably be the way of shopping this year. I'm sure they'll be a few stores to visit but sure won't be the same.

Had a nice propane campfire on the front porch again.

Sunday morning we slept in and then decided to have brunch. Ken wanted a fried oyster sandwich.  Where did that come from?!  Over 40 years ago we used to go on a canoe trip down the Russian River with his boss at the time and friends. We'd end up at The Tides Restaurant in Bodega Bay for breakfast on Sunday, he would always get the Oyster sandwich and a bloody mary.  I Googled their menu and they don't have it anymore but from the prices we won't be going back there anytime soon!  They were fun times!

Ok, let's see what I can come up with.  We had cans of oysters (he likes them on pizza).  Found a recipe for low carb mix and then rolled them in it, frying pan with a little oil and Yum (uh not me).  Made up two little almond flour waffles and he mixed up a spicy siracha spread.  Then we mixed him up a spicy bloody mary! 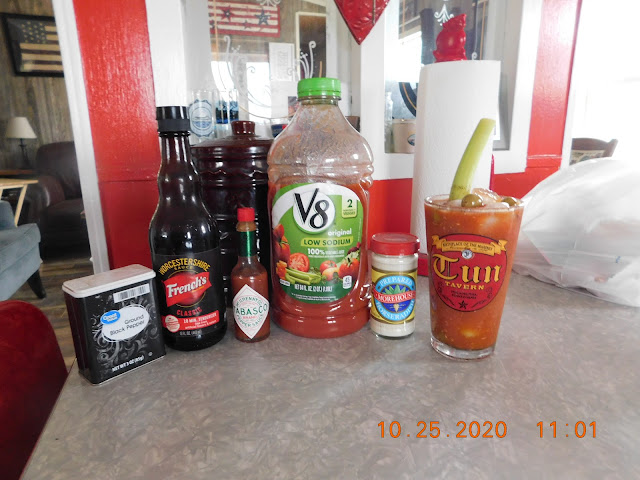 A lot cheaper than heading for Bodega Bay that's for sure! Delicious! 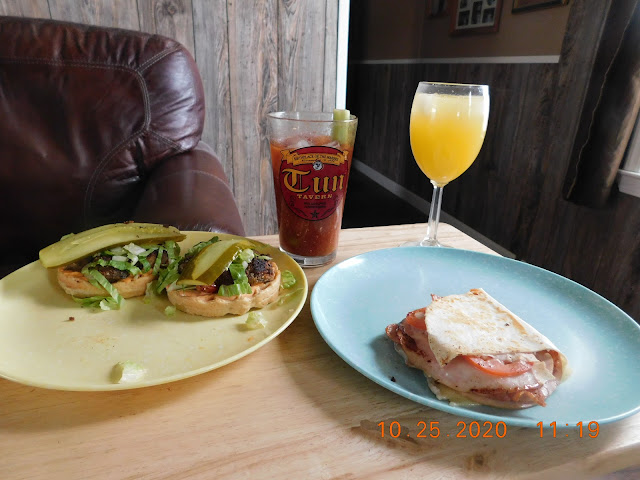 Hard to believe the food could actually be good for you! The drinks just tasty...

I took a low carb tortilla cut in half added some turkey meat and cheese melted it all together and then a mimosa for me. At least we didn't need lunch as it was about 1145 when we got it all together.

Kind of nice for a change, we haven't done anything like that in a long time.

Because temps didn't get out of the mid 40's, no fun going outside. We watched a couple of movies just because we could.

Late afternoon we went to the front porch while Ken got the barbecue started. Enjoyed our quiet happy hour with the propane fireplace rolling. Sure is nice to have. Ken barbecued some pork I had marinating and I cooked up some veggies as a side dish. At one point I looked at the weather it was 42 with a feels like 31..yep it was cold out there!

This morning (Monday) I woke up at 0230 and never could get back to sleep. At 0500 after tossing and turning I started the coffee and woke Ken up.  Cold in the bedroom, colder outside!

This morning's temps..Earlier is was 14 but feels like 8..guess the wind died down!

Our back heater was having issues when we were done with it for the summer. Today Ken called Barry, our propane guy and he'll be coming out to take a look either this afternoon or tomorrow. The wood stove does a pretty good job getting back there in the middle of the night but doesn't hold in these cold temps.

Ken ran to town to drop off our ballots at the Clerk-Recorders office.  Did a little baking this afternoon and it's tacos for dinner. So definitely an easy day. I'm not sure where the day has gone! Right now 48 degrees feels like 44 so I've been inside. Ken's found things to do outside until just a bit ago. He's tougher than me LOL. 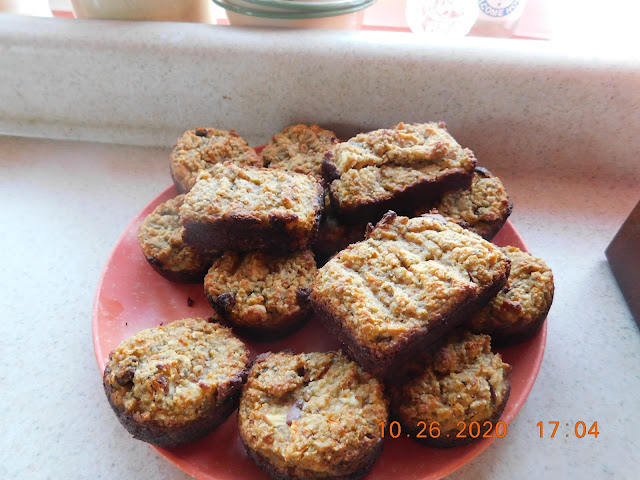 Had a nice conversation with our son Eric for a bit this afternoon. Got caught up on goings on. :)

Lori and Russell spent the weekend in San Diego with friends to celebrate a belated birthday for Lori. 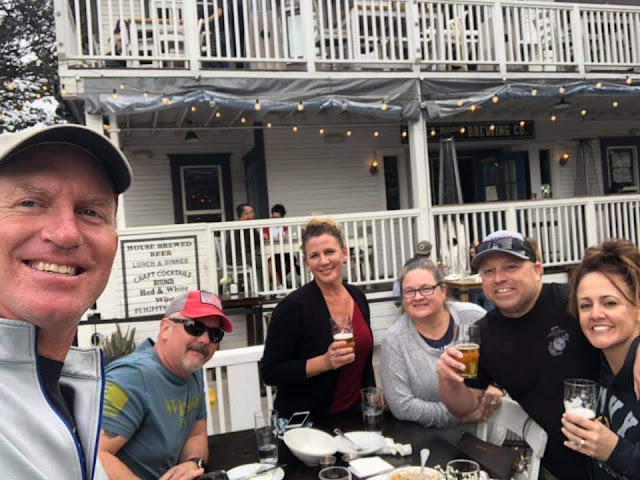 Lori and Russell on the right and friends...Looks like a good time was had by all!

Email ThisBlogThis!Share to TwitterShare to FacebookShare to Pinterest
Labels: cold, heater not working., memories of bodega