Friday morning we got ourselves going early since we were heading to KC's place to load the trailer with firewood! It's just about 4 hours there so we arrived around 1000 or so.

Ken and KC loaded the firewood and I visited with KC's wife, Sierra.  Rylee was at school so we didn't get to see her.  Really a nice visit and tons of firewood. Thanks you two!

Once they were done and we were done visiting we headed over to Garcia's Mexican Restaurant for what we knew would be lunch/dinner (linner). Our favorite server, Chris was there and just like old times. We hadn't been there since before Christmas last year as I've been carrying his card in my purse the whole year.  I decided to change to a smaller purse recently and it didn't get put in there.  Guess he'll get two this Christmas.  Sometimes there are special people out there and go over and above and that's Chris! Plus we always get a Christmas card of his adorable family 😍

After Garcia's we decided to surprise Ken's mom with a little visit. Always nice to see her 💖 We met her two new german shepard puppies too. After an hour or so it was time to head to Lori and Russell's house.

Russell was working so we visited with Lori and then headed over to Old Town Pizza in Roseville.  Allissa, Jacob's sweetie joined us there too.  Ken and Lori had a few beers and I had a couple of glasses of wine while waiting on pizza to take out.

Then it was time to head for the football game! Nice crowd at the school. We found Russell and friends and got ready to enjoy.  I wasn't expecting it to be so cold but it was.  Katie shared her jacket with me as a blanket. LOL.  I took a few pictures with my phone, but the ones the photographers do are so much better and closer. They didn't win, but still fun watching Aaron play. Next time though, UGGS and a warmer jacket. LOL. We're hoping to attend the Homecoming game in two weeks. 💙🏉🏉

Once the game was over we headed back to Russell and Lori's house for the night.  We visited until about midnight then bedtime.

I woke up about 0530 and jumped in the shower.  Somewhere after 0600 I got Ken up for coffee.  Russell joined us a little later.  About 0930 we left to go to KC's house to pick up the trailer of firewood.  Then we headed up the hill.

We made plans the night before to meet Russell, Lori, Aaron and Allissa at Edelweiss in Auburn, CA. We've been going to this restaurant forever and you can't beat the food and sevice! Huge portions and awesome.

We almost thought we weren't going to be able to make it work with the trailer behind us. The parking lot we planned on parking at had a farmers market going on. Darn! We did find parking across the freeway so we had a little walk, but not bad.

Russell and family already had a table when we met them so that was great. We chatted, ordered, ate and then had to say goodbye! So glad they joined us there!

No issues driving home and of course by the time we got home the day was done. We headed out back and had an awesome fire and just enjoyed the evening.

Sunday morning the bad influence ( I call my husband) said it was a bloody mary and mimosa morning. Ok (haha) He made them while I made breakfast. Egg sandwiches on low carb bread, oh so yummy! 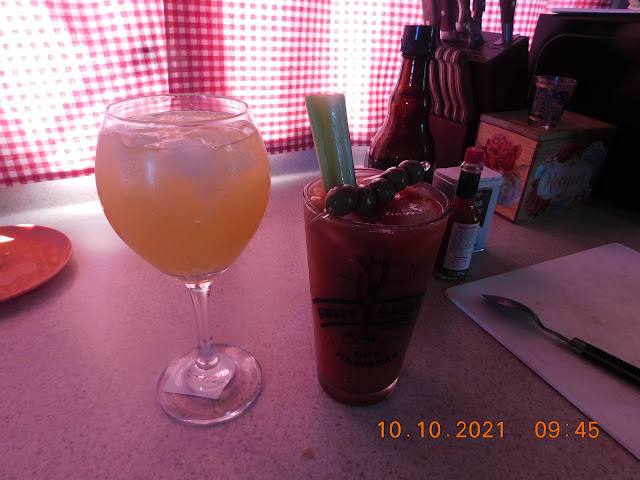 Then we finally got the day started.  I did have to remind him that it's Sunday he doesn't have to work all day! He did go next door and met with the landscapers to get the irrigation shut down for the winter.  He shut down the pump on her pool, now to figure out how to keep it winter safe out here.

We went out back and had another fire and he barbecued awesome burgers to go with the fries I brought home from Edelweiss.

This morning when we woke it was snowing! Not much but just enough. After coffee and checking in with friends the day got started.  Ken had 4 RVs to winterize today so he got that done! Supposed to be a hard freeze tonight, so just in time. Right now it's 42 with a feels like, 34. 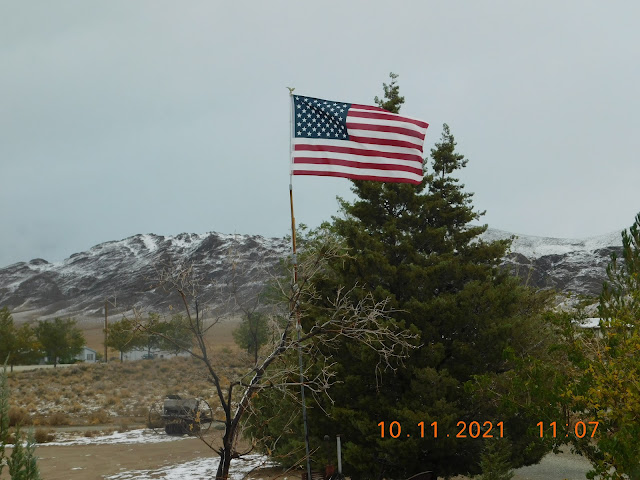 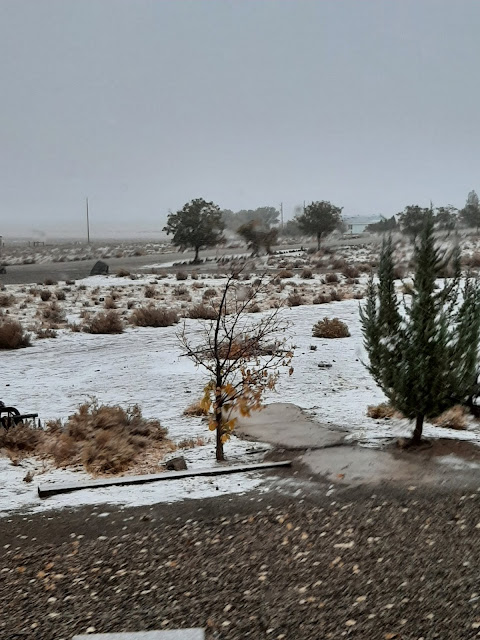 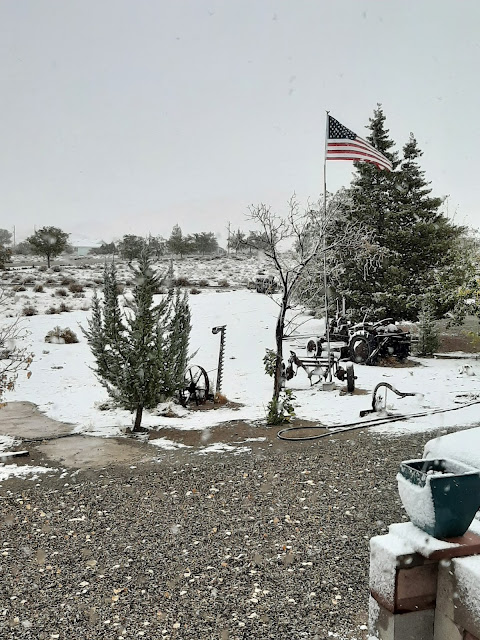 We've got some left over from Garcia's so I made enchiladas for dinner tonight. We'll put it all together and have a nice dinner.

We've had the wood stove going all day, I love it! The heat it puts out is so much better than the forced air heating we have!

We're heading to Carson on Thursday to get new tires on the Tundra so I'm trying to wait to buy groceries until then.  Right now the fridge is looking pretty bare LOL.

Time for Happy Hour, inside today! Have a great evening!