Sunday morning we woke up at Lakeside RV Resort in Pahrump, NV with the intention of heading for Lake Mead and  Boulder Beach.  Well, after checking temperatures we decided to head back to Death Valley.  The purpose of the trip was to find warmth and enjoy it.

Treated ourselves to breakfast at the Lakeside Cafe on the property. It's inside the casino.  It was Sunday morning and it looked like it at the cafe.  Service started off good with coffee and water coming quickly.  Took a while for the waitress to take our orders and a lot longer to get the food! Very understaffed for a Sunday morning. I do have to say the food was delicious and prices very reasonable. We were beginning to wonder if we would get out of there before our 1100 check out time. Would we go there again?  Probably not unless we saw more people working.

Got ourselves going and on the way back decided to head for Stovepipe Wells Campground. You can use charcoal barbecues there, but for some reason at Furnace Creek you can't.  We figured being Sunday it wouldn't be so crowded and it wasn't.

We settled in, I put my shorts on and we just enjoyed the afternoon. Ken barbecued the burgers he hadn't been able to do before. YUM! 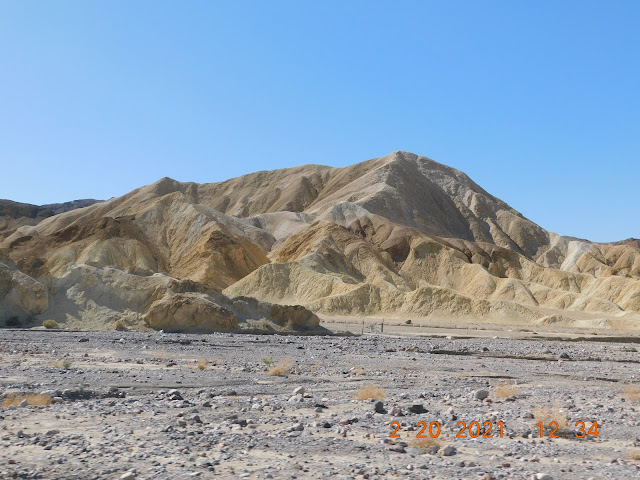 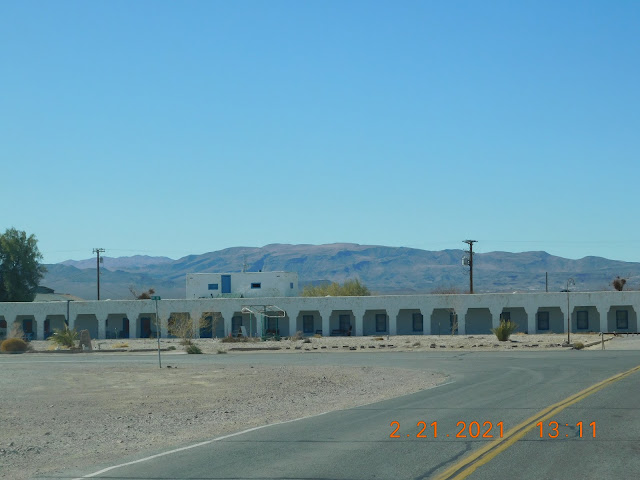 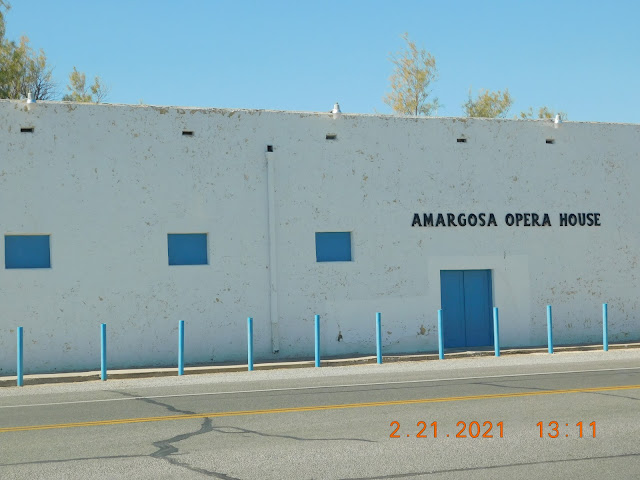 Shawn Williams, a young woman who we really like her music used to play here quite a bit.. 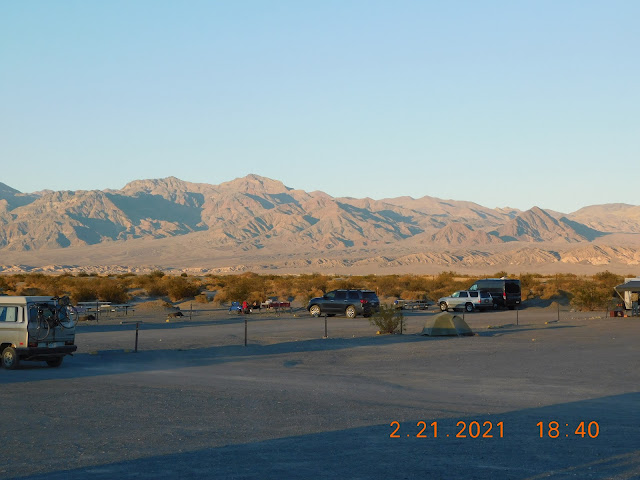 The view from our site at Stovepipe Wells.. 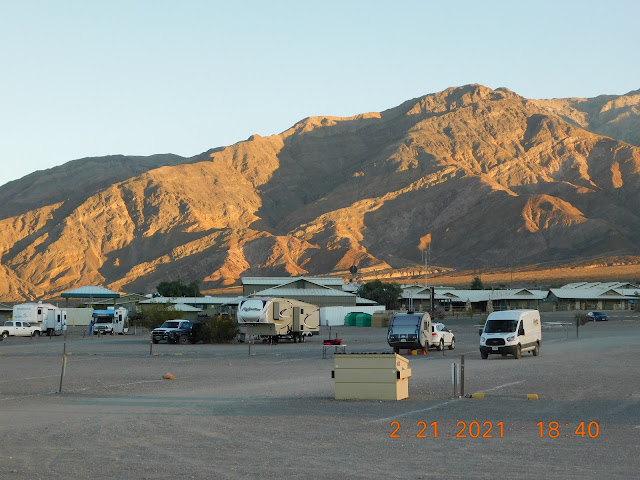 Another view from our site...

Tuesday we enjoyed our morning and after lunch decided to take a little ride. Mosaic Canyon was just across the way about 2.4 miles up a dirt road.  It's a beautiful place and you can walk into the canyon. Would be a perfect walk if it was in the morning. Just too warm to walk it in the afternoon.  From our campsite we watched cars go up the road over and over. It's very popular. 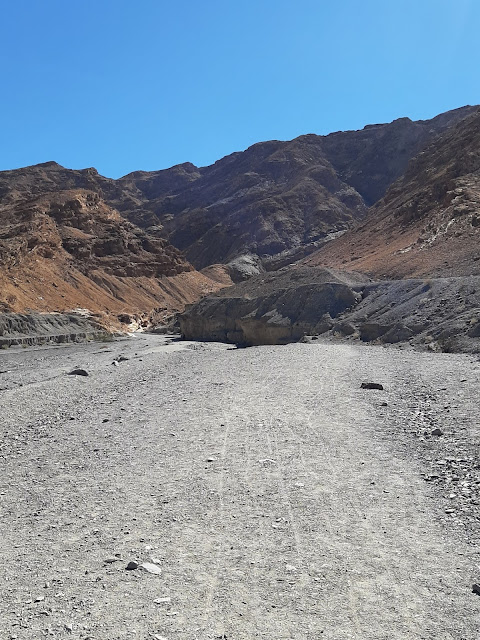 The beginning of Mosaic Canyon... 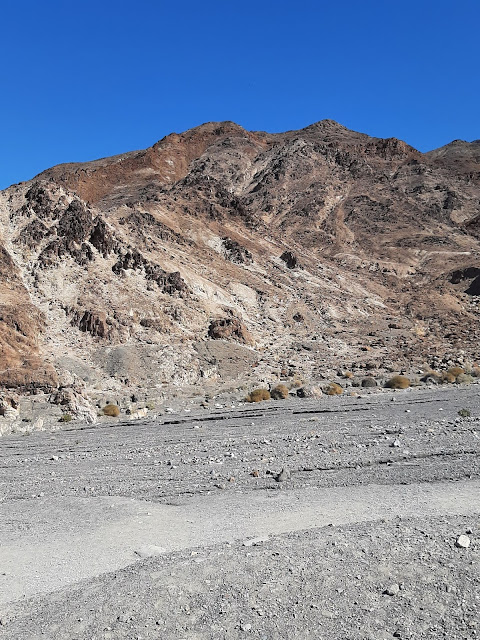 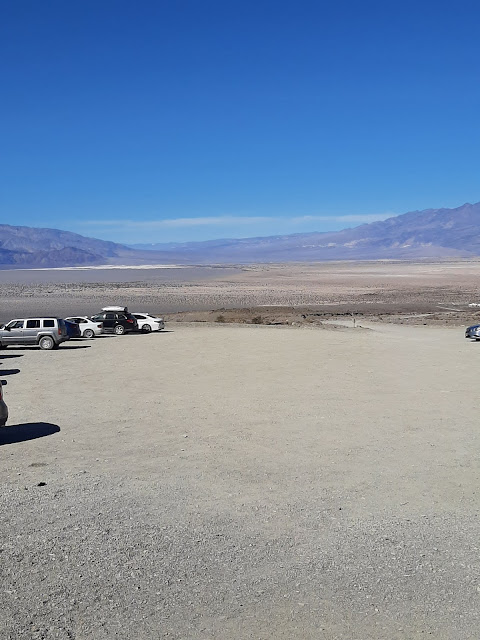 You don't realize in 2.4 miles how far you climb out of the valley...

After leaving there we took a drive up the road to the rest area. Put out a couple of chairs and enjoyed happy hour looking down in the valley. :) Funny while we were there a young asian man, wearing a mask inside his car by himself drives up and asked us where Palm Springs was? I talked to him a bit and he said he heard it was very beautiful there so he wanted to go.  He just drives around in his suv.  He did ask "What's there to see in Death Valley? I see Death Valley but there's nothing to see!"  Guess that's why he's looking for Palm Springs...if you can't SEE the beauty of Death Valley you better move on. 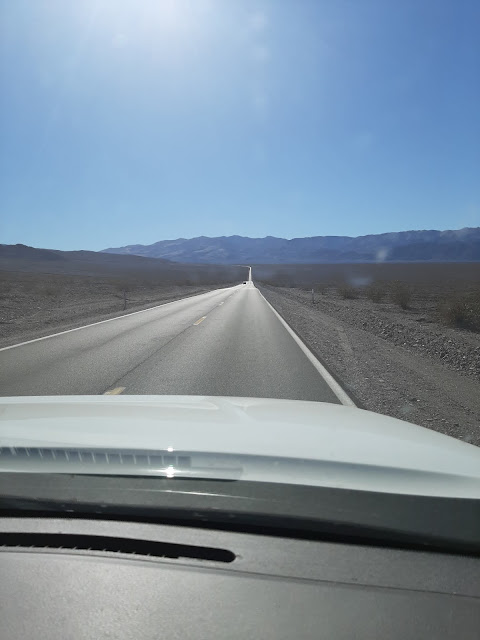 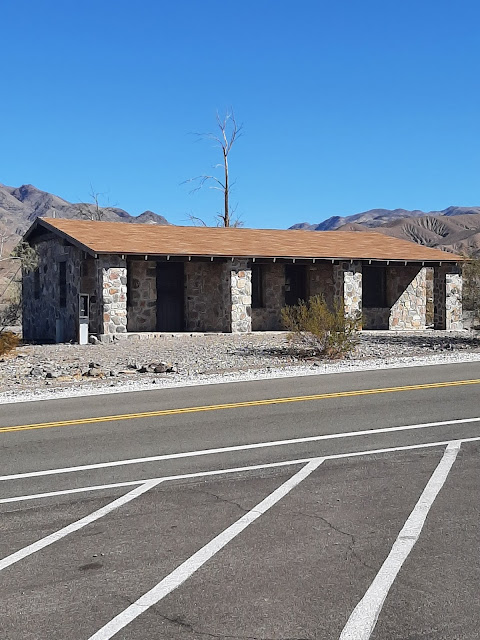 This was a ranger station/home built by the CCC's. One ranger who lived there was Stan Jones who wrote Ghost Riders in the Sky! Looking in the windows it was cute at one time. Unfortunately they are just letting the insides rot away..so sad. It's a beautiful building! I could live there! :) 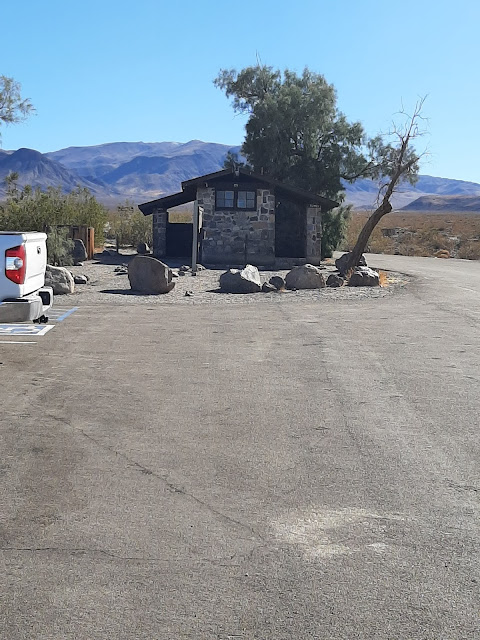 Across the road is the bathroom also built by the CCC's.  Gorgeous outside, inside not so much. Peeling marmlite :(

We headed back down the hill to camp where later Ken barbecued some pork that was very tasty. I had made a salad to go with mine. Mashed potatoes and green beans for Ken. Unfortunately after a few bites I ended up with a GERD event. Only had 3 or 4 in the last several years, this was the worst.  I won't go into detail but ended up going to bed hoping to be able to sleep.

In the morning I still felt like I did the night before and it was time to get ready to go. Made Ken some breakfast and we did our thing. We left about 0900. 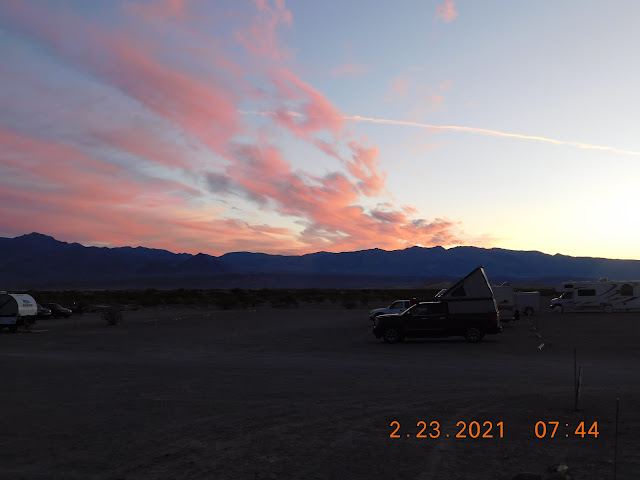 Sunrise on our last day...

All was on track to be home about 1400.  We stopped in Hawthorne for a potty break and Ken discovered a flat tire by the entry door. He got it changed and we were on the road again.

I was still feeling the discomfort.  Figured I'd be heading for the doctor soon.  I hadn't eaten or drank anything all day as my body wouldn't let me.  Long story short we got home and I went to bed.  Close to 24 hours after eating I was able to dislodge the lettuce and tomato that was apparently stuck in my esophagus.  Once that happened I was all better! Karen brought some broth over and it was delicious. Never had anything like that happen before.

Got a call in to establish with a new doctor and get this followed up on. We've had our bed on an angle for a year or more at the suggestion of Ken's ENT doctor.  It has made a huge difference in his GERD and snoring.  I think it probably did good for me too and the last week we've been sleeping flat. Oh the joys of getting older!

Today all feeling back to normal so I was able to go with Ken to Walmart in Gardnerville for some groceries. We're all stocked up!

Tried to get this published last night but our internet was slow, probably from the major winds we were having. Ken had to re winterize the Mansion as temps were expected in the teens and we are waking up to 14 degrees this morning.

Ken will finish his stuff today and I'll do a little cooking. Got a taste for some more cabbage lasagna.  It was a great trip (other than GERD) but it's always nice to be home again! Have a wonderful day!